DOCTOR WHO gets re-animated
With the Cybermen returning for the last two episodes of this season’s DOCTOR WHO, The BBC have announced that Manchester-based animation studio, Cosgrove Hall (probably best known for DANGER MOUSE), have employed the latest animation technology to recreate two lost episodes of the cult classic series. The BBC was in a quandary when it decided to release the DOCTOR WHO series and discovered sadly that, although the soundtracks remained, some 100 episodes were missing from the archives.

The unique project, the incomplete 1968 Cyberman story – “The Invasion,” has been done in black-and-white animation, based on the original actors and set designs, to fill in the gaps as seamlessly as possible. The BBC and Cosgrove Hall brought the second Doctor, Patrick Troughton, back to life in a beautiful broadcast quality animation with restored audio recording of the original transmission.

Head of BBC interactive drama and entertainment, Sophie Walpole, said, “In the year that the Cybermen have returned to Doctor Who, it seemed a good idea to complete one of their finest outings from the 1960s. The original two episodes of the series are lost forever, but we have found a unique and innovative way of presenting this classic adventure by lovingly restoring the soundtrack and setting it to new animation. It’s a gripping adventure which still remains faithful to the original.”

They used traditional animation, as well as digitally captured moving images as a guide for animation to create more realistic movement in some scenes.

The essential challenge was to make the characters, locations and style recognisable enough for a viewer to comfortably watch them in sequence without losing the thread of the story. Lead animator Steve Maher said, “We spent a lot of time reviewing the existing episodes of The Invasion and press stills that do exist to get a feel for the mannerisms and character of the actors as well as collecting reference for their clothing and environments.

“We also looked at a number of other Second Doctor adventures to be as accurate as possible in depicting the interior of the Tardis and the lovely Zoe’s Biba-Chick eye makeup.”

They directed the shows based entirely on the reconstructed soundtrack and a guide script based on that. “It was nice to find that when the BBC supplied the original INVASION shooting script during production that we had made many of the same decisions that the director had made in 1968,” said Maher. “Even so, many minutes of the original soundtrack of the missing episodes consisted entirely of atmospheric effects and footsteps so we overworked our imaginations animating those scenes.”

They resisted the urge pick up the pace to today’s production standards, and, while working with the soundtrack, they tried to inject a sense of urgency into the cutting of the action sequences.

“I suspect we may have had greater opportunity to employ helicopter shots and numbers of extras than perhaps a live-action drama crew’s budget would have run to in 1968 – though I would love to see the live action missing episodes and be proved wrong,” added Maher.

DOCTOR WHO: THE INVASION will be available on BBC DVD in November 2006.

Click here for a glimpse of what’s to come.

Who Gets New Companion?

London actress Freema Agyeman is rumoured to be next in line to replace Billie Piper as the companion to David Tennant’s Doctor Who in the show’s anticipated third season.

Freema, 26, will appear in the final two episodes of the show’s second season on BBC1. She will play a character named Adeola, who joins the Doctor and Rose, in their battle against the Cybermen.

STAR TREK revived
With its fortieth anniversary this year, STAR TREK is still as popular as it ever was, with a raft of DVD releases and rumours of a new movie and a story about a revival of the TV series. 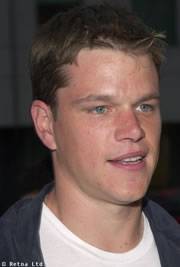 It seems that J.J. Abrams (LOST and MISSION: IMPOSSIBLE III) has been feted by Paramount to make the eleventh STAR TREK movie as a prequel to the original TV series centring on Kirk and Spock’s early days at Starfleet. Matt Damon is rumoured to have been approached to play the young Captain Kirk, and has even had William Shatner’s approval. The casting is all at the rumour and gossip stage at the moment, but Abram’s seems to have a magic touch at the moment, so it is just a matter of waiting for an official announcement.

And speaking of reviving STAR TREK, television producer Bryce Zabel (THE CROW: STAIRWAY TO HEAVEN) and fellow producer J. Michael Straczynski (BABYLON 5) had an idea to “reboot” the series back in 2004, although it never came to fruition, possibly due to cancelling of STAR TREK: ENTERPRISE because of poor ratings.

The treatment called for a re-imagining of the original series, based around the three main characters of Kirk, Spock and McCoy, set on the U.S.S. Enterprise during its first five-year mission. In an interview with SCI FI Wire, Zabel said the show would reset the mythology to “start a new ‘Universe B’ which would be free to move in new directions as needed and yet allow us to work with the classic characters that all fans love and cherish. The best of all worlds, if you will.”

Zabel added that the new mission would be “oriented toward discovering the truth behind an ancient life that appears to have had a hand in creating the numerous humanoid species throughout the universe. That would have been the over-mission, which would have steered the Enterprise into finding its share of new worlds and civilizations just the same.” (It would also be a convenient way of explaining why TV aliens always looked like actors in rubber suits.)

Zabel wrote on his blog: “We wanted to do what they do in the world of comics, create a separate universe so we could embrace the good stuff, banish the bad, and try some new things. We wanted to use Kirk, Spock and McCoy, but show them off as you’d never seen them before.”

Citing “the terrific job the Sci-Fi Channel has done with “Battlestar Galactica” (which I just voted for on my Emmy ballot as Outstanding Drama for the second year in a row)” he said, “If you’re trying to imagine the changed tone that JMS and I were thinking about, this would be a good place to start.”

When asked why release the treatment now, especially in light of Abrams movie project, Zabel said, “Might as well let the fans who’d heard about it and wanted to see it, see it.”

The 14-page treatment Zabel and Straczynski developed can be downloaded from Zabel’s blog.

Moore’s Watchmen emerge From (development) Hell
Zach Snyder (DAWN OF THE DEAD) has been hired to develop and direct WATCHMEN, a movie based on Alan Moore and Dave Gibbons’ seminal DC Comics graphic superhero novel, according to The Hollywood Reporter. Warner Brothers is financing the long-gestating movie, which Alex Tse is writing and Larry Gordon and Lloyd Levin are producing.

WATCHMEN has a development history almost as epic as the story the comic tells, the trade paper reported. The project has seen such studios as Fox, Universal and Paramount come and go and has seduced and vexed such filmmakers as Terry Gilliam, Darren Aronofsky, Paul Greengrass and screenwriter David Hayter.

WATCHMEN is one of the most critically acclaimed series in the genre and is a crime-conspiracy story that provided the first realistic look at the behind-the-heroics lives of superhero archetypes.

IRON MAN Dates
Confirming postings by director Jon Favreau (ZATHURA), Marvel and Paramount announced that IRON MAN is staking out a May 2, 2008, release date, according to The Hollywood Reporter. Favreau alluded to the date in a posting on his Iron Man MySpace.com site.

Based upon Marvel’s iconic superhero, the film will follow billionaire weapons-manufacturer, Tony Stark, who confronts the sins of his past after he is injured by one of his own weapons. Equipped with a high-tech suit of armour, he becomes Iron Man to combat evil on a global scale.

The Paramount Pictures and Marvel Entertainment film will be an adaptation of the Marvel Comics armoured superhero. The project marks the first motion picture to be produced independently by Marvel Entertainment and also marks the first production under former Marvel Studios chief executive officer Avi Arad’s newly launched production company, Avi Arad Productions, under its alliance with the studio.

FULLMETAL ALCHEMIST Makes U.S. Debut at Anime Expo
FULLMETAL ALCHEMIST: THE MOVIE – CONQUEROR OF SHAMBALLA, the movie based on the very popular TV series, FULL METAL ALCHEMIST, will have its US premiere at this year’s Anime Expo in the Main Events hall in the Anahiem Convention Center on Monday, July 3, 2006, from 12:00 noon to 2:00 pm.

“The FULLMETAL ALCHEMIST series has transformed the way anime is viewed in the U.S. and the movie will do the same for anime features and movies,” said Gen Fukunaga, president/ceo of FUNimation Ent., the movie’s producers. “We knew when we acquired the series that it had tremendous potential, and we are just getting started.”

The film takes place in Munich in 1923. Two years have passed since Edward Elric’s sacrifice ripped him out of his world and into ours, separating him from his younger brother, Alphonse. In that time, Ed’s continued research into rocketry has allied him with Alphons Heiderich, a fellow researcher who oddly resembles Ed’s brother. Progress has been slow, however, and Ed has become discouraged. But when he saves a quiet Gypsy girl with the power to read minds, Ed is quickly pulled into a plot by the Thule Society and the burgeoning Nazi Party that could drag both worlds into a terrible war. 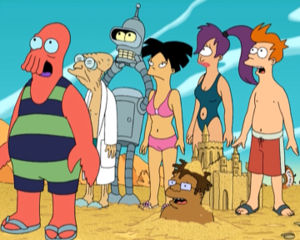 The popular FUTURAMA TV series has a new home, with Comedy Central in the US picking up rights to air at least 13 additional, soon-to-be-produced episodes, which will air in 2008.

“We are thrilled that Matt Groening and Twentieth Century Fox Television have decided to produce new episodes of FUTURAMA and that Comedy Central will be the first to air them,” said Bernath. “There is a deep and passionate fan base for this intelligent and very funny show that matches perfectly with our audience and it is great that we can offer them not just the existing library, but something they’ve never seen as well.”

Adamant and Andromeda revived too
The NFT (National Film Theatre) has two special events on July 10. ADAM ADAMANT, the BBC’s famous fantasy series, which told the story of an Edwardian adventurer frozen in time and reawakened in the London of the Swinging 60s is being revive onto DVD. The surviving episodes from the cult classic series have been restored for a BBC (2Entertain) DVD release with some fascinating extras. The NFT will screen a long-unseen episode from the series at 6:30 pm and then welcome members of cast and crew to reminisce about the show.

This is followed at 8:45 with a showing of the only surviving (recently recovered) episode from A FOR ANDROMEDA, followed by a chance to discuss the landmark serials with members of the cast and crew.
A FOR ANDROMEDA was produced and directed by Michael Hayes for the BBC in 1961 and starred Julie Christie, Peter Halliday and Frank Windsor. Its 1962 sequel, THE ANDROMEDA BREAKTHROUGH (With Susan Hampshire) presented UK audiences with gripping, adult sci-fi adventures with an eco-disaster theme. The extant ANDROMEDA material is also being released on a BBC (2Entertain) DVD, complete with intriguing extras.

A joint ticket, for both events, is just £12.50 and can be booked on the NFT website.

And for the more literate
SF authors William Sanders and Lawrence Watt-Evans have launched Helix, a free online magazine of speculative fiction, which will appear in January, April, July and October.