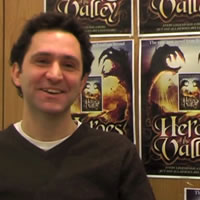 The multi-million selling worldwide success of The Bartimaeus Trilogy would be a hard act to follow for anyone, but Jonathan Stroud has returned triumphant with his new novel Heroes Of The Valley, a less complex book than we’re used to but one that deals with deeper and more important issues.

SCI-FI-LONDON was lucky enough to catch up with Jonathan while he was in London recently to talk about bringing this new story to the page.