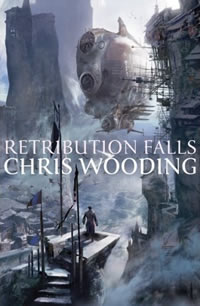 I knew absolutely nothing about Retribution Falls when it turned up in the post but one look at the cover art and a quick read of the blurb and it instantly leap-frogged it’s way to the top of the ‘to read’ pile and rightly so, it’s just my kind of fun.

Darian Frey is captain of the Ketty Jay and leader of a small, highly dysfunctional crew who, with their trio of ragged fighter craft, make their living on the both sides of the law, running lucrative and questionable cargo, smuggling contraband, robbing airships and generally make a nuisance of themselves, all the while avoiding the heavily armed flying frigates of the Coalition Navy.   A meet with Quail the WhisperMonger points them to a cargo freighter loaded with uncut gems that looks like an easy heist and fast bucks – retirement bucks – but the caper goes terribly wrong when the freighter explodes and suddenly Frey and the crew of the Ketty Jay are being hunted down not just by the Coalition Navy but by every mercenary and hired contractor with a ship and a gun. But Frey knows that that freighter was rigged to blow and he and his crew have been framed to take the fall. If he’s going to prove he was framed, find out who’s behind it and why and get his life back it’s going to take all of his criminal expertise.

Now it’s way too easy to draw comparisons here with Joss Whedon’s brilliant ‘Firefly’ and then get all uppity about it not being as good, but that would be missing the point. Retribution Falls is a rollicking good action-adventure yarn that absolutely doesn’t take itself too seriously. The setting is kind of wild-west/pirate but with steampunk sensibilities instead of cowboy chic and there is a smattering of daemon magic in the weave just for good measure. The mish-mash crew are a bit by-the-numbers, each with a dark past they don’t want to talk about – the aloof captain, the feisty female navigator, the drunken doctor, the posh passenger but they each play their part admirably, meshing exactly as you expect with the banter and backslapping breathing enough life into them to make the story work.

And there’s the thing. It really is all about the story. It’s not completely mindless, each of the crew has to deal with their own particular skeleton-in-the-closet and the transformation from crew to team is handled well, especially, I think, with Frey and it’s enough to lift Retribution Falls out of the realms of purely pulp. There’s also a sideline about the power of unchecked religious fervour and a backstory about arctic-based mystical demon-spirits, both of which are open for exploration in later books, but from the first page to the last this is a book chock-full of dockside gunfights, aerial chases, dogfights and fist-fights and the pace is pretty relentless, slowing just enough to let you catch your breath between the action and that’s why I loved it – it’s FUN!

I’ve heard that there will be other books and other adventures for the crew of the Ketty Jay, all standalone adventures so you can buy them and read them at your leisure rather than as a series and I for one am looking forward to next one immensely.

Retribution Falls will be published by Gollancz on 19th June 2009 and is available from Play.Com, Blackwell and all good book stores.