The Festival Friday is now over, after a long warm evening.

We started off with a disappointment, as due to various technical difficulties the makers of tonight’s world premiering movie, Eraser Children, were unable to get us a copy of the film, despite numerous attempts to transport it in various different forms from Melbourne. As well as refunding people’s tickets and plying them with goodie bags, we also laid on a free replacement showing of our opening film, Eyeborgs, and as the cast and crew were still around they popped in to see the film again and chat with the audience afterwards.

The Directors’ Guild of Great Britain held a small networking drinks party for the visiting filmmakers, giving them the chance to meet some of the local filmmakers. Our guests were last seen heading off into the West End Friday night melee in search of a suitable watering hole, accompanied by the ladies of the Guild.

In traditional festival fashion we then split off into two streams, with the Apollo’s screen 1 playing host to a pair of zombie films – Yesterday, which was accompanied by a Q&A with director Rob Grant, and Mud Zombie, the first Brazillian film we’ve shown at the festival and seemingly the first zombie film to come out of the country. 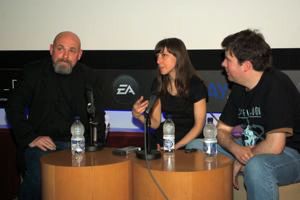 While that went on, screen 4 played host to our director’s screening – Caro and Jeunet’s The City of Lost Children. Having not managed to get Marc Caro over to the festival for last year’s premiere screening of his film Dante 01, we are delighted to have him as a guest this year to introduce this, one of his most famous works. After a quick prize draw for an XBox 360, autographed and illustrated by Caro, and a Q&A hosted by Alex Fitch, Marc apologised for any problems that the film might cause for those that believe in Santa Claus and left the audience to this full showing of his visually stunning film on the big screen.

As the weekend rolls in, the festival launches into its busiest day tomorrow, with Lab events interleaving with films from 10:30 on Saturday morning, and the power of Red Bull and ice cream as movie watching fuel being put to the test by our all-nighter screenings, starting between 11:30pm and midnight. There are still tickets available to most of our daytime events as of writing, but the MST3k Comedy all-nighter and Star Trek TOS movie marathon have been full for a while, and the others are close to selling out. Book today! Remember, it’s cheaper than a hotel room!