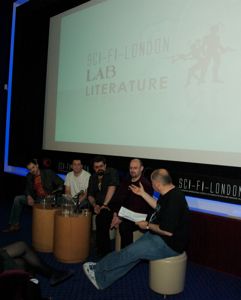 With the all-nighters over, with happy and tired crowds spilling out into the street to let us clean up the cinema a bit, we moved on at full steam into our Sunday program. Normally we’d end the festival today, but as well as adding the Lab series to our programme we’ve also pushed the festival out to an extra day this year, with more events on May Day Monday.

We thought we would start out sedately with a Lit Lab panel discussion on The New Heroic Fantasy, chaired by Lit Lab coordinator Rob Grant, but this quickly turned into a lively discussion, and set up the day. We continued with science and lit labs covering a variety of topics, including Comedy and Satire in Sci-Fi and Fantasy, which included a live reading of an episode of the radio version of Robert Rankin’s recently adapted Brightonomicon, reuniting some of the original cast with some new faces, including Rankin as Hugo Rune. We also ran our first “Focus On” event, with examples of Israel’s contributions to science fiction film, presented by Uri Aviv, director of the Icon Festival. 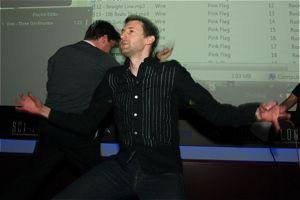 We finished the afternoon’s events with our now traditional pub quiz that isn’t in a pub. The battle was hardfought and after two teams were tied for first place, final positions were decided by a dance-off between Dave Green of the Rulers of Luton and Tom Hunter of the Mexi-khaaaans. The audience response was close enough that a second XBox 360 was found and each team walked off with a star prize and box of goodies.

The evening’s film showings started with the world premiere of The Hunt for Gollum, the fan film prequel to Peter Jackson’s Lord of The Rings. A full Screen 4 warmly welcomed the cast and crew for both the showing and a Q&A. It debuted simultaneously online at DailyMotion,, and is available to watch in HD.

We continued with a pair of Turkish films, G.O.R.A. and A.R.O.G., and welcomed writer/director/star Cem Yilmaz to the Apollo for a drinks reception (where he was quickly mobbed by his fans and the Turkish media) and also to introduce his films. Despite the heroic running time of the double bill, topping 4 hours, the screen dispensed grinning people at the end.

While that was going on we held our SCI-FI-LONDON awards ceremony, honouring the winner of the EA Dante’s Inferno trailer competition, Karl Maddix, and the top three films produced during our 48 hour film challenge. The full house of visiting filmmakers, entrants and interested onlookers were treated to showings of the trailer and three films, with Glimpse and Mark Up taking joint runners-up prize in the film challenge and Tracker walking away with the win. All of the films will be up on our DailyMotion page soon.

We finished off the evening with the sold out UK premiere of Cryptic, followed by a Q&A with director Danny Kuchuck.

Visit our flickr group for photos of festival events.