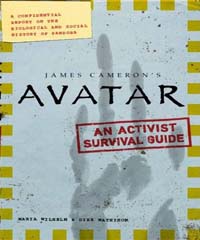 This lavishly illustrated film companion takes the reader on a journey into the magical world of Pandora, to get closer to the landscapes, creatures and characters of James Cameron’s blockbuster epic, AVATAR. This is the only adult tie-in book to what many are already describing as the cinematic event of 2009.

Sumptuously illustrated over 200 pages it covers everything you could want to know about Pandora, from astronomy and geology, to native flora and fauna and, of course, the all-important Na’vi physiology and culture. For fans of the tech it also covers the weapons, transport and technology that the humans take into Pandora and has a glossary to keep you up-to-date on the terms and jargon used as well as a Na’vi-English dictionary, should you ever get stranded on-planet without a com-link.

Marking James Cameron’s first film since 1997’s Titanic, Avatar is set to be not just the most exciting film of 2009 but also a major milestone in movie history. Using state of the art technology, Cameron and producer John Landau have created an entire world – Pandora – and realized it in a way never before possible. For the first time ever, 3-D effects conjure up a world every bit as real as the one we inhabit. Yet the world of Pandora is unlike anything we’ve experienced – ten foot blue humanoids wander peacefully amidst a world of flying mountains, phosphorescent forests and unimaginable vistas.

This is a perfect tie-in book, offering a stunning companion to this cutting-edge masterpiece, featuring a comprehensive look at the fictional world created for the film, including flora, fauna, planets, and more. AVATAR will be the most unique, engaging universe ever realized on film and the AVATAR FIELD GUIDE is the perfect guide to that world as well as the only resource for fans who are left wanting more. AVATAR is a genre-bending blend of sci-fi action-adventure and a timeless, emotional and personal story of redemption and revolution. The talent is exceptional, featuring Sam Worthington, the hot young star of Terminator Salvation, Sigourney Weaver, Giovanni Ribisi, and Michelle Rodriguez, among others. An epic story, the Cameron brand, and fantastic visuals! This promises to be the must-see film of 2009, and for any fans of the film this will be the ultimate self and gift purchase.

Avatar: The Field Guide to Pandora: A Confidential Report on the Biological and Social History of Pandora is published by Harper Collins and is available from Play.com, Blackwell and all good book stores.