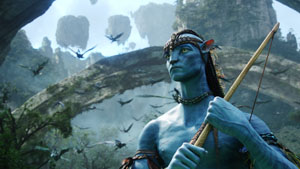 It’s been one of the most hotly-anticipated movies of the decade, and possibly one of the most hyped too, and yet Fox, in their “wisdom”, decided to muzzle the press with strictly enforced embargoes on reviews. Of course, by now it is clear that there are a lot of outlets that have ignored the embargo, or who simply didn’t sign one – such as any journalist that attended the world premiere last week. Normally, when a strict embargo is placed on a movie it is generally because the movie has been heavily marketed and is actually a steaming pile of poop, which to my mind feels like Fox don’t have much faith in their $300m investment in Cameron’s latest opus. This is the man who has the highest grossing picture to date, with TITANIC, and is the creator of iconic TERMINATOR, which forever unleashed Arnie on the world.

Although there are plenty of reviews out there already, which are, for the most part, very positive, I decided to respect the embargo, not out of “respect” but under threat of legal action. While part of me thinks “Fuck ’em, if I have to write about their movie when they say I can, why should I bother, it’s not doing me any favours”. As one of the most popular dedicated sci-fi websites (really, just Google sci-fi) I feel I have a certain responsibility to post this review, as well as reporting Fox’s gagging order. 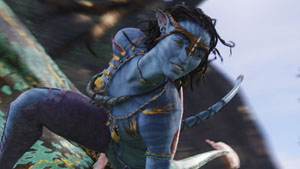 So let’s get on with it. A couple of months or so back the UK press were summoned to the IMAX in London for “AVATAR Day”, where some of the completed footage was shown to us to whet our appetites. At the time I was completely underwhelmed. I had the impression I was watching a 3D cartoon of Smurfs on steroids. It was all style over substance. Admittedly it was only 15 minutes or so of footage out of what is now a 160-minute epic, so I was giving Cameron the benefit of the doubt, given his early track record of creating spectacular movies – especially in the sci-fi genre. As I settled down in my seat at Fox’s screening room in Soho, and donned the rather stylish Dolby 3D glasses, it wasn’t with any great anticipation, nor with the belief I was about to experience the “future of cinema” – mainly because if I was watching it, it was clearly the present of cinema. 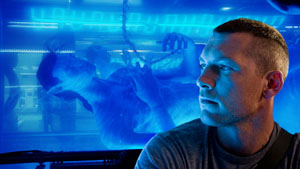 The film’s story is a fairly simple one. In a future where all the Earth’s resources have been depleted, there is a colony on an Earthlike planet called Pandora (not to be confused with Pandorum, or the owner of a certain box) that has a mineral called Unobtainium (I thought they must have forgot to change the name of it from an early draft of the script) that the megacorporation Resource Development Administration – RDA aka The Company – is keen on extracting at any cost. To do this they have to overcome the Na’vi (with the obligatory apostrophe in their name), the planet’s indigenous inhabitants, either by diplomacy or force. Into this picture comes wheelchair-bound ex-Marine Jake Sully (Sam Worthington) who has to replace his deceased scientist twin brother in the avatar programme. The avatars are genetically engineered versions of the 10-feet-tall natives that are remote-controlled by the humans as a way of both gathering information about and creating trust between the two races. Anyway, predictably, Jake gets separated from the other scientists and manages to survive using his Marine training, and being saved by a Na’vi princess, Neyitri (Zoe Saldana). To cut a long story (and it is) short, Jake’s avatar falls in love with the princess, is torn between his promise to the military leader, the scientists, and the princess and her nature-loving people. This leads to big shoot-out with only one eventual winner. One point that doesn’t seem to have been mentioned anywhere is the fact that avatar has two meanings. The one referred to in this movie is the one familiar to game-playing, computer generation of a proxy character, but an avatar, in its original sense is a divine incarnation, such as the blue-skinned Krishna of Hinduism, and Jake’s character does bear parallels with Muad’dib from DUNE. (In fact, the production company is called Dune Entertainment.) 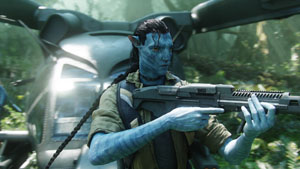 Having said that, basically what we have is a sci-fi version of DANCES WITH WOLVES meets SYLVANIAN FAMILY with the aforementioned Smurfs on steroids, in a world that looks like Roger Dean’s covers for Yes. While that is oversimplifying it, it really is a fair summation. The Na’vi live in a huge tree and are connected with nature, which also brings reminiscences of Miyazaki’s PRINCESS MONOKE. The message is an obvious one about American corporate and military might mindlessly destroying cultures and environments in the name of power and greed – as if we still need that pointed out to us when it is in the news every day – and how we are all connected with nature and the world around us. Thankfully, Cameron is a good storyteller and filmmaker and manages to keep the pace of the story moving along with a good balance between the two worlds, so although we are aware of the underlying morality it is punctuated with explosive action and mind-blowing visuals – and it is the visuals that are the big talking point of this film, and rightly so. 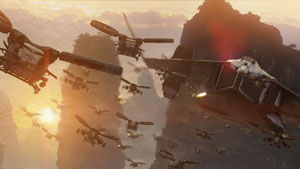 The world that Cameron has created is truly spectacular, and his attention to detail is amazing. He has clearly spent a lot of time studying nature and eco-systems – even if they are at the bottom of the oceans. WETA, and ILM et al, have done an incredible job of bringing not only the flora and fauna to life but also the computer-generated Na’vi. Apart from the fact that they are 10-foot-tall blue aliens, you do not need much suspension of belief. You never question whether they are real or not because, with the combination of the actors’ skills and WETA’s animation, they look totally real and convey emotions like no other motion-captured characters have to date. This is the film’s real achievement, and sets a new standard for CGI, although WETA did an equally good job on DISTRICT 9. As for the 3D; to Cameron’s credit he avoided all the usual 3D gimmicks of stuff jumping out of the screen, and used it to give the film real dimension and depth (the depth that was missing from the screenplay, some cynics might say). However, 3D is still a gimmick and I’m still not fully convinced by it, but like surround sound (which is also fantastic in this film) it does make for a more immersive experience. However, the effect is a bit disorienting, especially at 160 minutes, and lots of people have complained about headaches afterwards, so be warned.

Should you go see it? Definitely, and in 3D. It is a spectacular epic filled with awe-inspiring vistas and creatures, and plenty of explosive action. Is it all style over substance? Thankfully not; although the underlying story lacks any real originality. Is this movie the future of cinema? Only in the way that Bruce Springsteen was the future of rock and roll.