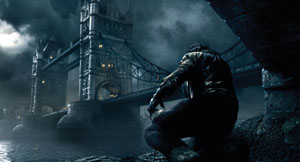 Of the triumvirate of classic horror characters, we have had countless incarnations of Dracula and vampire wannabes; a recent MUMMY franchise, but not much, in recent times, of the Wolfman and his lupine cohorts. Discounting Being Human and HARRY POTTER, the last real big-screen outing of lycanthropes was UNDERWORLD, and the less said about that the better. There seems to be only two genre-defining werewolf movies, Lon Chaney’s WOLFMAN and John Landis’s AN AMERICAN WEREWOLF IN LONDON. Now we are into the 21st century and filmmaking and digital effects technology have reached exciting new levels, the idea of a new Wolfman movie, and one that seemed to be intent on respecting the original story, was an exciting prospect: even more so when you look at the names behind the production. 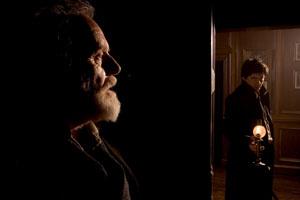 With the world’s favourite mumbling actor Benicio del Toro in the lead (and as producer), supported by Anthony Hopkins, Emily Blunt and Hugo Weaving, written by Andrew Kevin Walker (SE7EN) and David Self, and edited by Walter Murch, one of the world’s most respected cutters, it should have been a winner. Unfortunately it is another film that works on paper but not on screen, where the whole is less than the sum of the parts. The fault for this falls squarely on the shoulders of director Joe Johnston, whose track record includes HILDAGO and JURASSIC PARK III. Although he manages to create a dark mood for the film (sometimes so dark you can’t see what is happening), it is not one that draws you in. There are some stock-standard scares, but ones you can sense are coming most of the time. And there is far too much exposition through dialogue – all the more disappointing because scribe Walker wrote one of the smartest scripts of its time with SE7EN. Another big disappointment was Hopkins, often regarded as one of our greatest actors, who gave the impression it was all too much of an effort. His character’s umming and erring came across as if he couldn’t remember his lines, rather than a character trait. His voice just lacked conviction and kept switching between aristocratic English and an amalgam of Celtic accents. While I’m in a complaining mood, I kept expecting Hugo Weaving’s character to say “Mr Anderson”, as he was using a similar tone and inflection to his best-known role. However, both del Toro and Blunt do a sterling effort of being tortured, lovelorn souls, and an unrecognisable Art Malik plays a splendid man-servant. 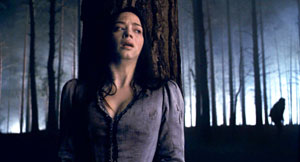 If we forgive the screenplay, the essence of the monster movie has to be the creature and this almost saves the movie. The gore and mutilation is as bloody as you could hope for in a 15 certificate movie, but it is the transition from man to werewolf that is the deciding factor, and even with Rick Baker in charge, it isn’t a patch on what he did in AMERICAN WEREWOLF more that two decades back. And how come it invariably woke the next day clothed?

If hirsute monsters are your thing then there maybe something in it for you, but give me Landis’s take of an American werewolf in London any day, or night.

THE WOLFMAN is in cinemas from 12 February from Universal. 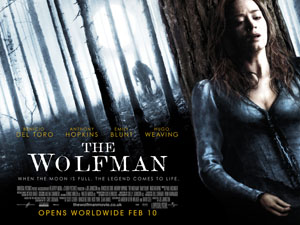 We have a fantastic cinema quad poster of the film signed by Benicio Del Toro, Emily Blunt, Hugo Weaving, Anthony Hopkins, Joe Johnson (director) and Rick Baker (Special FX), to giveaway courtesy of Universal. To be in the draw for this fabulous prize, click on the link below. The competition closes on 1 March, 2010.