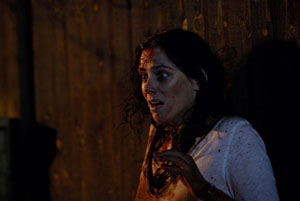 If Channel 4’s Brookside could do with less of anything it is probably drama, but the 2009 Lawrence Gough film SALVAGE, filmed in Brookside’s quiet cul-de-sac, brings a new element of controversy to the streets of Merseyside.

The film starts off with Jodie (played by Linzey Cocker) being forced by her father to spend Christmas with her mother, Beth (TV mainstay Neve McIntosh). In typical soap-opera style she walks in on her mother and the one-night stand she had drunkenly picked up the night before in an “intimate moment” (gross!). Clearly, there are going to be a whole range of issues for these two to deal with over the holiday. Jodie storms off to her friend’s house, and while Beth is outside hollering abuse the happy family reunion is interrupted by a special ops military unit closing down the street and forcing everyone into their homes.

SALVAGE is an appropriate name for a film where all of the characters need saving and redemption. While no one quite knows what is going on and terrorism is one of the main suggestions on the table, it is clear that things are much worse than this and somehow linked to a container that has washed ashore nearby.

As the body count mounts up and the residents try their best to survive, the tale turns even darker and it begins to look like no one will get out of this alive.

SALVAGE is a nice little homegrown horror with all the right elements to make it an entertaining few hours. While the monster is not that great and the ending is a bit clichéd, the cast hold the whole film together and overall, SALVAGE is a bit of a hidden gem. 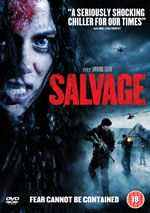 SALVAGE (cert. 18) is released by Revolver Entertainment and will open at selected UK cinemas on 19th March 2010 as well as being available on Sky Box Office, iTunes, FilmFlex and LOVEFilM on the same day.