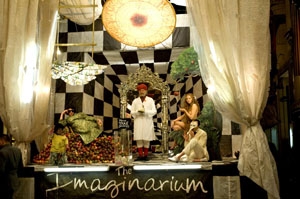 I’m not sure how objective this review of Terry Gilliam’s latest film will be because he is one of my favourite directors. This is because of two factors; his vivid imagination and his disregard for Hollywood machinations that have earned him his maverick label. There is also a certain amount of sympathy for huge amount of bad luck that seems to plague his shoots, and this latest film is probably the most notorious following the untimely death of Heath Ledger. Of course, depending on your philosophical standpoint it could be argued that all death is untimely or, conversely, all death happens at the exact moment it should – a debate worthy of the titular Doctor and his antagonist, Mr Nick. 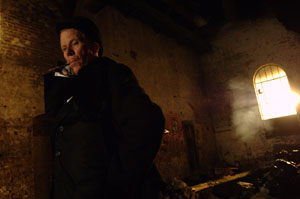 The film is essentially a morality play, of the type that toured Britain in mediaeval times, except it is set in modern-day London, although the performers and their caravan are definitely from another time. This is more than in part due to the fact that Doctor Parnassus (Christopher Plummer) is immortal but suffering under a curse from the aforementioned Mr Nick (aka the devil) (Tom Waits) with whom he lost a bet that meant he would have to turn over his daughter Valentina (Lily Cole) to the devil on her fast approaching sixteenth birthday. In a new bet Parnassus hopes to keep his daughter by saving five souls before Nick can collect five. He intends to do this using his Imaginarium, a special mirror that transports the person into his mind and dreams can be fulfilled. And the ill-fated Ledger? Well he is a bit of a chancer with amnesia, who falls for Valentina and wants to help Parnassus save his daughter.

Without wanting to give too much away, each time Ledger’s character passes through the mirror it reveals a different aspect of his forgotten character, which are then portrayed by Depp, Law and Farrell, who all stepped in after Ledger’s much-documented demise. It is uncanny how much Depp and Law look like Ledger on first glance, while Farrell is playing a much darker aspect of the character.

But is it any good? Well, like I said at the beginning, Gilliam is one of my favourite directors, and I enjoyed the journey, but Gilliam does have a knack of dividing audiences. His last film, Tideland, definitely divided viewers between the majority who either hated it or found it offensive, and the handful who actually liked it. While this latest outing won’t be quite as divisive, partly out of sympathy for Ledger, not to mention its morbid curiosity, it’s not the best thing Gilliam has made, not by any stretch of even his considerable imagination. Some of it is a bit messy, especially some of the Imaginarium sequences that are let down by poor special effects, but it is still far more inventive than the dross being churned out of Hollywood. I would rather spend two hours watching a flawed Gilliam than most of the studio tosh, or the gritty British realism, that gets foisted on us. Probably the best way to describe it is as a blending of Time Bandits and Munchausen, with a bit of Fisher King thrown in and topped off with some of Tim Burton’s Charlie and the Chocolate Factory. It is a film of good versus evil, filled with visual and philosophical ideas, along with the bizarre comedy that Gilliam does best. However, anyone going to see a star performance from Heath Ledger may be disappointed because it is the old boys, Plummer and Waits, that steal the show.

This is definitely a film you should see, but heeding the advice Gilliam gave before a preview screening of Tideland, “Watch it through the eyes of a child”.

Extras: Nothing quite on the scale of “Hamster Factory”, but there are a lot of short behind-the-scenes features and deleted scenes that don’t’ really give a great insight into Gilliam’s work, along with commentaries.

THE IMAGINARIUM OF DOCTOR PARNASSUS is released on DVD and Blu-ray on March 29 and is available from Play and all good retailers.