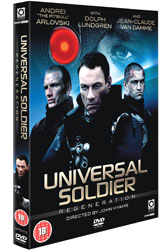 Ahead of Sly Stallone’s THE EXPENDABLES, where all the action heroes of the last three decades are rolled out, comes the revival of another ’90s’ Emmerich sci-fi actioner, featuring its two original stars JCVD and Dolph Lundgren.

In this third outing, directed by John Hyams (son of Peter (2010), who produced and shot) a new generation of UniSols have been developed and one of them has been taken by a group of Russian separatists to help them with their fight for independence. When the terrorists/freedom fighters kidnap the children of the Russian leader and threaten to blow up what’s left of Chernobyl, the Americans arrive with their new improved UniSols to battle against the seemingly unstoppable NGU (Andre ‘The Pit Bull’ Arlovski), and they have to call in retired Luc Deveraux to save the day.

The story is pretty thin, but the action is full on, and if you like watching brawny men of varying ages, in combat gear, beating two shades of shit out of each other then this will be right up your street. Of course, films like this require a fairly large suspension of disbelief, but they do beg the question: if the UniSols can heal quickly after being wounded, how come that regenerative power doesn’t stop them from aging?

If you missed SCI-FI-LONDON’s screening of this film at Eastercon, it is available to by on DVD and Blu-ray now from Play and all good retailers.