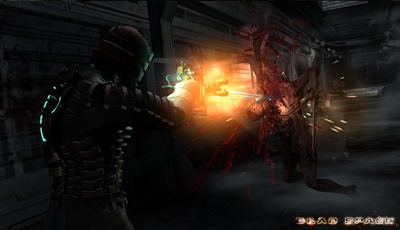 Sci-Fi London podcaster Alex Fitch talks to writer and graphic designer Antony Johnston about combining text and image in comics and other media focussing on the computer game he scripted, Dead Space and its comic book prequel and interactive websites.

SFL: Looking at the Dead Space franchise, would I be right in thinking you wrote the comic book prequel, the script for the game and the cartoon as well?

Antony Johnston: Well, there is a cartoon version, but I didn’t write that. The anime, Dead Space: Downfall was written by a couple of other comic writers, Jimmy Palmiotti and Justin Grey, and they wrote the screenplay for that. What I did as well as the comic and the game script, was the writing for a website called noknownsurvivors.com which was a sort of puzzle / interactive website, where you solved a bit of an ARG style scenario and then you would be rewarded with a video clip or a bit of animation or some files and documents, that sort of thing. I wrote the scripts for those before they went live which was very interesting, I’d never done that kind of stuff before. I’ve just written the script for the Wii version of the game, Dead Space: Extraction, which comes out later in the year.

SFL: When it comes to writing something over so many different platforms and so many different media, how do you go about that? Do you start off with a basic structure that you know you can expand and delve into or a solid short story and then branch out from that?

AJ: It’s hard to say, and I’m not dodging the question, but it’s almost sort of instinctive. With something like Dead Space, there are so many different media to take into account and the storyline, the master, overall storyline is so large, complex and there’s so much of it. With the comic, we knew we wanted to do a prequel and we knew roughly at that point how the game was going to pan out, so it was a question of “How are we going to establish the back story?”. We have to establish the tone the game is going to take, but we can’t give away clues that would help people to sort of cheat or beat the game. We can’t give away too many secrets that will spoil the game for people. So, that was why in the prequel we decided to basically create an entirely new raft of characters in a whole environment you don’t see in the game at all but is connected to it and it really was a question of just finding the links between what we knew was going to be in the game and what we could do in the comic.
I finished scripting the comic before I wrote the game, so when I came to script the game, I looked back on the comic and I had deliberately left myself little avenues that I knew I could go back to. When I wrote the script for the game I thought: “How can we tie this in a bit closer and make the bonds a bit closer?” by mentioning characters and scenarios that people who read the comic will go: “Oh yeah, I remember reading about that thing happening”… It was the same again with the interactive stuff on the website, that wasn’t quite so closely connected, but there is still this massive continuity you have to kind of keep in your head and rely on this master timeline to make everything fit in.
I’m probably not making much sense! But that’s because it is largely instinctive, you look at it and go: “Will that work… will it… won’t it?” and then you have to make a judgement. Once you’ve decided, because obviously this was for EA, a huge company putting massive resources behind it, you just have to then dive into it and make sure that the decision you’ve made works and make it work. If you hit a problem, then you have to solve it. You can’t go back to the drawing board, because I’m not just making a comic for me and an artist to put out there, there are hundreds of people at the other end who are doing stuff that you know will tie into it. There’s a lot of pressure, but it’s good fun because I hadn’t done anything like that before and the whole continuity business… I wouldn’t say it’s a headache, but it’s certainly a challenge and one I hadn’t faced before myself, so I enjoyed it.

SFL: In terms of writing the script for the game, how much of the game had already been developed before they invited you on board?

AJ: Well actually, because of my involvement with the comic, I was actually on board the project as a whole for quite some time, two years, before the game was actually released. Which is unusual, certainly, but I didn’t actually script the game until about eight months before it was released, by which time I’d already finished the comic, so I saw the whole thing develop as it went, ‘cause they kept me in the loop. By the time I came to write the script, I’d say probably 80% or 90% of how the game would play was locked down. That was decided and they were like: “These are the bits we can’t change” and they presented me with walkthroughs of how the game would play out and then the dialogue fitted in to all that.
There was still a bit of wiggle room, especially the audio only logs; in the game, one of the devices is that you find recordings of audio logs left by people who were on the ship explaining what had happened. Because those only require a voice, they’re very cheap and very easy to do! What you’ll find when you play through the game is that a lot of audio logs you find were entirely written by me, the content wasn’t dictated to me at all, they were like: “We can do this, we’ve got the resources for this… Go wild!” . So I came up with 3 or 4 different groups of people, divided their story arcs over successive audio logs and that sort of thing.
For the more complex stuff, that would require actual visible characters in the game, it was given to me what had to happen but not how it would happen, or how it would be set. So, it would be: “In this point in the game, the main character goes here and he gets a message from somebody else telling him he has to go there and to do that”, now write us a script (that lasts) one minute, that’ll do that! That’s the sort of thing I mostly had to do and it’s the same with new game as well, most of the time it’s taking those bullet point elements of a scene and thinking: “right, I have to make this interesting and develop a conversation and characters out of it”.

SFL: So, it’s a bit like the old Marvel way of writing comic books, in that you had input into the plot some time ago, then all the art was done and then you sort of added text to the ‘speech balloons’ as it were?

AJ: You know, I hadn’t thought about it like that, but yeah, it kind of was a bit like that. That’s an interesting way of looking at it. I don’t want to take away from the guys at EA who were in charge of the story, I did have some input into the game story but it was quite minimal, most of the story and the basic twists and turns were already down to them. They’re a good bunch of guys and I just put a nice, respectable sheen to on it. 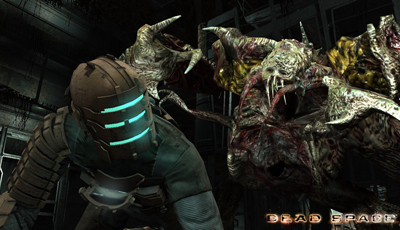 SFL: It’s interesting though, thinking of you as a comics writer, that you’re used to writing a script and depictions of panels for someone else to illustrate, while in that case, all the illustration had been done first and you had to fit around that, rather than the other way ‘round.

AJ: Effectively, yeah. It was a very different way of working, but I do play video games myself and writing games is something I’d wanted to do for some time, so it was a bit of an education for me as much as anything, but I was grateful for it because it is something that I found I enjoyed doing and that I would like to do more of. So it was different, but I like a creative challenge and I should point out, in case it isn’t clear, that it wasn’t the case with the Dead Space comic, we’ve only been talking about the game. The comic was done in a very conventional manner, I came up with the plot and the outline, wrote the script and panel descriptions and Ben did the artwork and off it went. So that was done very conventionally, but the game was very different to how I’m used to working, but as I said, it was an education and I enjoyed it.

Listen to Alex’s complete interview with Antony at panelborders.com which also looks at the writer’s work on the new Wolverine manga and adapting Alan Moore and Anthony Horowitz’ prose work for comics.