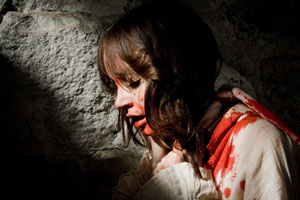 THE HOUSE OF THE DEVIL at first looks like a labour of love from writer/director/editor Ti West. Released in 2009 the film has a retro early ’80s aesthetic that really suits West’s filmmaking style and slow and considered way of telling a story, though when I first started watching I did wonder if they really needed to pretend that the last 20 years of filmmaking hadn’t happened to tell this particular story.

I wondered this for the first 40 minutes and then I fell asleep on the couch, right after the first murder (yes, I really can sleep though anything). The next time I tried to watch the film I was a little bit drunk. I once again fell asleep 40 minutes into the film. 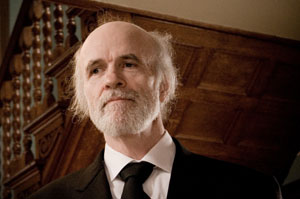 After a few days I was wondering what it was about this film that made me fall asleep (excessive intake of alcohol and lack of caffeine aside) I finally worked it out… it is all Tom Noonan’s fault! Noonan plays creepy-weird Mr. Ulman in the film. I think he is a greatly underrated actor (check out THEY’RE MADE OUT OF MEAT, a short film that screened at SFL in 2007). But mostly what I love about Noonan is his voice. I would marry his voice in an instant if there were a legal process for that sort of thing.

After this realisation I knew that the next time I attempted to watch this film I would need to be prepared. Mr. Noonan would not lull me to sleep with his extra special brand of creepy, weird talking. Not this time!

And I am 100% grateful that he didn’t. This film really is a gem. I had doubts about it and after reading a little bit about why West’s CABIN FEVER 2: SPRING FEVER has been delayed I wasn’t sure that West writing, directing and editing this feature would really make a great movie, but the quality of it is a true surprise.

The film is set in 1983 and starts with cute, young college student Samantha Hughes (played by Jocelin Donahue) agreeing to rent an apartment she really can’t afford. When she gets back to her dorm she finds the sock-on-the-door-go-away-I-am-having-sex indicator and she ends up walking around campus, where she comes across an advertisement for a babysitter. When she calls the man who placed the ad (creepy Noonan!) he tells her that she is needed that night while he and his wife attend a party to watch the lunar eclipse.

Later that evening Samantha’s best friend, Megan (Greta Gerwig) drives her out to the isolated house in the middle of nowhere and things begin to get weird. When they arrive, Mr. Ulman takes Samantha aside and tells here there actually isn’t a baby in the house. He explains that his mother-in-law is elderly and he begs and coerces Samantha to stay in the house, with the offer of a load of money, and keep an eye on her, promising that she wouldn’t have to do anything and just has to be there.

Clearly, this is not want you want to hear when you take a job babysitting.

The pacing is perfect for the slow unraveling of the story, and the considered use of music and the addition of some light-hearted scenes (for instance, when Samantha dances like Molly Ringwald in THE BREAKFAST CLUB while wearing her Walkman) make the impact of the brief moments of horror truly detestable. It isn’t a gorefest, but the use of sudden and gratuitous gore juxtaposed with the long drawn-out style of storytelling, is nearly perfect.

The final climax and final showdown really pays off and I have to say that I am not at all disappointed by the film. I think West has done an excellent job and I look forward to seeing what else this clearly talented horror filmmaker can do.

THE HOUSE OF THE DEVIL is available now on DVD from Play and all good retailers.