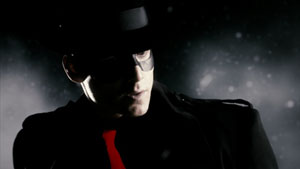 Frank Miller has certainly made an impact on the world of comic book movies in recent years. Apart from the influence of his Dark Knight stories on Chris Nolan’s two Batman movies, Miller’s other two best known graphic novels have been quite influential. SIN CITY, which he co-directed with Robert Rodriguez, was a reasonable critical and box-office success, although Zack Snyder’s adaptation of 300 was a bit less so. However, both films pushed the idea of the digital backlot to new levels. How successful they were creatively is a matter of debate. To my mind they were a great technological achievement, but far too sterile and soulless to watch.

For his debut directorial solo Miller has chosen not one of his own works but that of his mentor, Will Eisner, generally regarded as the godfather of the modern graphic novel, or sequential art as he called it. The Spirit is Eisner’s best-known creation; the story of a murdered cop who comes back to life as the titular masked hero who is impossible to kill. With his association with Eisner and his experience of working with Rodriguez (who also started as a comic artist) on SIN CITY, Miller seems to be the logical choice to bring the classic comic to life. However, logic isn’t always right. 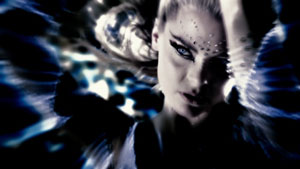 For some reason, known only to themselves, distributor Lionsgate, went to great lengths (and expense) to launch the film here in the UK without actually showing the whole film. At the beginning of December the press were called for a junket and red carpet where we were shown 15-20 minutes of clips from the film, all with a lengthy video introduction from producer Deborah Del Prete. From those clips it is fair to say that it is true to the spirit (pun unavoidable) of the comic original, however, like SIN CITY and 300, the shooting technique is actually a distraction from the storytelling – or, at least, it is for me. Why the other comic book movies, such as IRON MAN and THE DARK KNIGHT, work is because they are set in a real, if exaggerated, world that we can relate to, whereas with these digital backlot films the settings become too dominating and distract the viewer from the performances. In the scenes I saw from THE SPIRIT this wasn’t such a big issue because the characters were more like cartoon characters, with the women (Eva Mendes and Scarlett Johansson) looking and behaving more like Jessica Rabbit than real women, and Samuel L Jackson, as nemesis The Octopus, hamming it up for all it was worth, especially during the Tom and Jerry fight sequences. Although, having said that, Eva Mendes assured the gathered press that none of the women in the film are ever damsels in distress, and are all empowered and independent women who are the backbone of the story. Frank Miller added that in this post-feminist world a woman’s beauty can be part of her power and enjoy it for what it is, which should make the film appeal to both men and women of all ages and not just teenage boys. 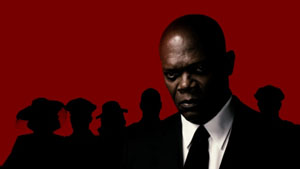 One of the interesting things about these press conferences is how much the cast talk each other up in a mutual appreciation society sort of a way, as anyone who has watch DVD extras will know, that can often give a distorted view of the movie’s real worth. I am sure that they did all have a wonderful time but somehow the cynic (or realist) in me does think that they are obliged by the studio to talk it up. One of the disadvantages of the press conference is it is almost impossible to get any decent material, at best you get once chance to ask a question. I always try to think of something a little more challenging than the usual obvious questions that get asked. Unfortunately this time I wasn’t as clever as I thought I was because someone else asked a similar question to Frank Millar about how he adjusted from being a lone comic artist to being a director in the collaborative process of filmmaking. Millar said that he found that after working with Robert Rodriguez on SIN CITY he fell in love with actors and he easily he could establish a rapport with them (a vital skill for any director), which made him want to be a director. He said he liked to give them some markers and sense of context and then seeing where they took it – then taking all the credit for it. Eva Mendes said that Frank’s way of directing usually involved drawing out the scene for her. So with my question gone I had to quickly think of something else. I started by asking Sam if he appreciated the art of comics as much as his character in UNBREAKABLE, which he said he did and always has some comics with him when he travels because they have always been a part of his life. Then I managed to sneak in an extra question as to how hard it was to translate from the drawn image to the moving image. Sam’s reply was, “It all depends on whose drawn image it is.” Then Frank Millar interjected: “You don’t! What you try to do is strike at the same nerve that the drawing did. In the CG backgrounds you use the physical artwork that has existed all these years to inspire new cityscapes etc, but when it comes to figurative drawing, I ain’t fixing her [pointing at Mendes].” In a normal interview I would have been able to carry on with the discussion, but the next journalist was ready with her question to actresses about whether they enjoyed “sexing it up on screen”, which led to a long talk about the costumes. 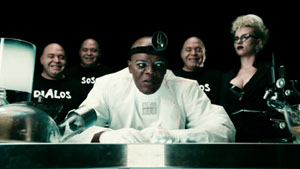 Although I only got to ask one question at the press conference I wasn’t too disappointed because I had been promised the chance to film/video interviews at the evening launch event. When I arrived at the venue, the old sorting office on Oxford Street, which had been converted into a SPIRIT-themed warehouse, I was told that I was told that I was now in the online and print pen. This meant being stuck at the end of the line, after the stills photographers and TV crews. I also knew this meant that the pack of journalists present would get two minutes between us to ask questions, which made the press conference seem like an in-depth interview. I was at a red carpet – something I avoid at all costs because they are a waste of time, for the reason just given. At least this red carpet was inside and without the hordes of screaming fans, and there was a party straight after – but no film. 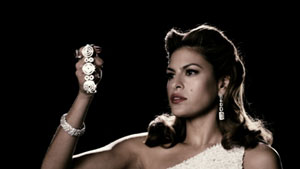 So is the film worth seeing? To be honest I have no idea. From the glorified trailer I saw, I’m not so sure. From the passion of the director that was shown at press conference and his speech at the launch party, then possibly. My concern is that if they are not showing it to the press before its launch they must be hiding something, and my experience tells me its not treasure. We’ll find out on January 1 when it opens in cinemas all over the UK.