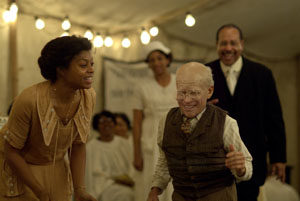 Based on story by F. Scott Fitzgerald, THE CURIOUS CASE OF BENJAMIN BUTTON recounts the life of the eponymous Benjamin who is born with the physiology of an 80-year-old man, is rejected by his father at birth and taken in by a kindly woman who works in a care home. The film then follows his life and loves from his birth in 1918 up until his death. As the years pass Button gets progressively younger as all those around him age.

As a fantasy concept it is an interesting one, akin to time travel, but like time travel it is open to scrutiny and questioning of the paradoxes, such as: if he was born as a normal size baby with the physiology of an 80-year-old and he grew to normal size as the years passed, why did he return to the size of a baby and not to the size of an old man with the attributes of a child and a baby? If they knew how old he was when he was born, then they could have made an educated guess as to how long he was going to live. And why doesn’t he have the wisdom of an old man that all the life experiences have given him when he becomes a youth, instead of acting like a typical know-all teenager? But this is nit-picking because the story had bigger faults than these, mainly it was not that interesting. 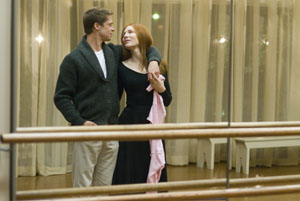 With its slew of Oscar and BAFTA nomintations, including Best Picture, I was expecting something quite special from this film. The trouble with expectations is they are rarely met (INDY 4, STAR WARS prequels). It does deserve the nominations it has got, except Best Picture. There is no denying that Brad Pitt has given a great performance, although not on a par with TWELVE MONKEYS or FIGHT CLUB. Fincher has shown that he is a versatile director; the effects are amazing, as is the whole design of the film. Strangely Cate Blanchett doesn’t get any support nominations, possibly because she always gives stunning performances that they no longer standout from her previous ones. The problem is, the sum of all the award-nominated parts don’t add up to the whole that is needed to make a great picture. A lot of that is down to the screenplay, which has also been Oscar-nominated, because, despite living through extraordinary times Button lived a fairly ordinary life, most of which was spent pursuing an aging Cate Blanchett.

It’s a great looking film and a marvellous technical achievement but it’s just not right on the button.