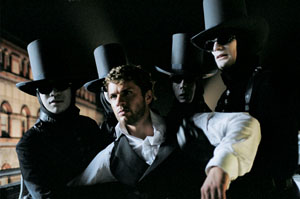 It seems that there is rarely an original British sci-fi/fantasy feature film these days that when they do come along we should at least give it some attention. I’m not talking about adaptations from books or comics, or Hollywood films made in the UK, but original screenplays made by British directors. As much as we now claim Terry Gilliam as our own, he pretty much exists in a world of his own. When FRANKLYN had its world premiere at the London Film Festival it stood out because not only was it British but also because it was one of only three sci-fi/fantasy films showing at the festival (the others were THE SECRET OF MOONACRE – a British-Hungarian co-production for children and an unfathomable French film called THE POSSIBLITY OF AN ISLAND). 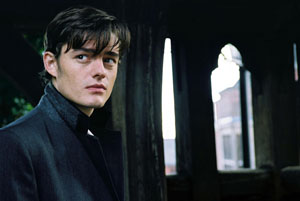 FRANKLYN is the first feature film from Gerald McMorrow, who also wrote the screenplay, and it is an ambitious, multithreaded film that not only looks good but also makes you pay attention to what is going on. McMorrow actually refers to it as an urban fairytale, which is a fair summation. The film follows four characters: Jonathan Preest (Ryan Phillippe), an atheist vigilante who seeks revenge on the leader of the futuristic, religion-controlled Meanwhile City; Emelia (Eva Green), an artist with emo tendencies from a privileged background; Milo (Sam Riley), a young man with a broken heart; and Peter (Bernard Hill) a deeply religious man who is searching for his son, a disturbed Gulf War veteran. The film opens with Preest in the dystopian Meanwhile City and these scenes are rich with imagination and intrigue, then it switches to contemporary London, although one that doesn’t seem entirely familiar, as we follow the other three characters’ stories. 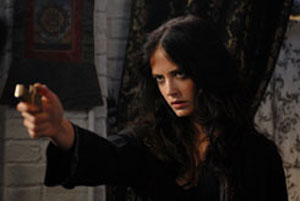 However, as it changes locations it changes genres, which, unfortunately, could lose some of the audience. It goes from being a visually stunning sci-fi film to an urban drama about love and loss, but it is worth sticking with because at the end all the strands are pulled together into a satisfactory resolution. Don’t go in expecting to see the dark, dystopian epic that it is being sold as, because it is much more than that. Of late, original British genre films have been taking the comedy route – such as the forthcoming releases FAQ ABOUT TIME TRAVEL and LESBIAN VAMPIRE KILLERS – so it is actually refreshing to see a genre film that isn’t afraid to be intelligent, dramatic and a little different, and above all uniquely British. Go and see it, but go with an open mind.

FRANKLYN is out now.