So: the ‘unfilmable’ graphic novel finally makes it way to the big screen. Will Zack Snyder be carried through the streets, triumphant with the knowledge that he’s managed to achieve the – seemingly – impossible of doing justice to one of the most famous examples of sequential art (that’s the preferred names for graphic novels, don’t you know) of all time. Or are the fans pulling on their Rorschach masks ready to belt whip Mr Snyder into an alternate universe? As might be expected, the answer is ‘a little from column A, and a little from column B’. 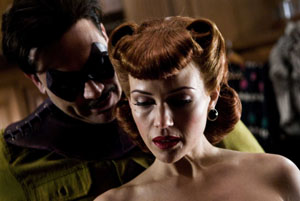 Eddie Blake’s evening is rather rudely interrupted when an intruder throws him out of his apartment window. And matters are compounded when he turns out to be The Comedian (played with fascistic glee by Jeffery Dean Morgan), an infamous superhero and former member of the Watchmen, a band of costumed crusaders dedicated to truth, justice and the American way. Enter Rorschach (Jackie Earle Hayley, who gets the role spot on) a rather psychotic vigilante who is convinced that someone is targeting former ‘masks’. His investigations bring him contact with his former partner Nite Owl (Patrick Wilson), the ‘smartest man on the planet’ Adrian Veidt (Matthew Goode) and the Godlike Dr Manhattan (Billy Crudup). Soon they discover a terrible truth at the heart of a massive conspiracy.

Snyder has managed to stick pretty faithfully to Alan Moore’s original story (though the ending has already caused some consternation amongst the hardcore fans. Message to them: shut up, as it works and makes sense) and manages to keep much of the intricate structure that made the original so beloved. But, being Zack Snyder, the word subtlety isn’t really the name of the game here. His trademark slow-motion action sequences are abundant here (ooh, look pretty explosions! I’d been impressed if it wasn’t the 500th time in the last 5 minutes that I’ve seen one) and the blaring and obvious use of music tracks start to get grating (though the opening credit sequence set to Dylan’s ‘the times they are a changin’’ is bloody great). But there’s enough intelligence here to counter-balance the more bombastic elements of the film and should prove engaging enough for fans and non-fans alike. Oh, and a word to the squeamish. If you thought THE DARK KNIGHT was a bit rough, then be prepared to be shocked by this. None of the violence is held back – indeed it’s nastier than the original – and there’s a reason that this has been given an 18 certificate…

Performances are uniformly great with the fact that the majority of the cast reside firmly in the ‘unknown’ category working in the film’s favour. Rather than star spotting, the characters are allowed to inhabit their roles and do so without feeling the need to place tongues firmly in cheeks. Crudup impresses, even though he spends most of the time as an animated blue thing who – erm – consistently lets his animated blue thing swing about (you’ll see what I mean…). As well as the aforementioned Hayley. A lot of praise must also go to Goode for his faintly disturbing portrayal of Ozymandias and Carala Guigno gets some presence in a genre usually given over to the male of the species.

Ultimately, WATCHMEN the film will never be as good as Watchmen the graphic novel. After all, the original Watchmen was never meant to be filmed. It’s genius lay in being able to push back the boundaries of the graphic novel form and showing readers just what could be done with flair and imagination. And times have indeed changed – what was once a fresh and exciting take on the notion of the ‘superhero’ is now a clichéd idea as we seemingly cannot have anyone save the world unless they have at least one or two psychological problems. But even then, as a film, WATCHMEN is an exciting spectacle, with some intelligence, that fits in nicely with the current boom of comic book movies.

Either way, Alan Moore still couldn’t give a monkey’s.