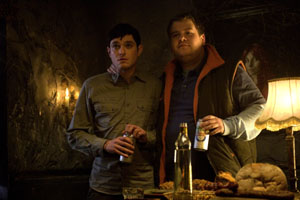 There’s not a lot to say about this film from Matt Horne and James Corden, Britain’s comedy flavour of the month. It does what it says on the label. It is a contemporary take on Abbot and Costello Meet Dracula, but with British humour and adolescent fantasy wish-fulfilment.

Two blokes decide to get away from their everyday lives of unemployment and girl troubles, with a walk in the country, decided upon by a throw of a dart. When they arrive at the village they are met by the sight of a vanload of voluptuous European beauties. The lads think their luck’s in when the local villagers send them to stay in the cottage as the girls but, of course, all is not as it seems. The village is the resting place of the lesbian vampire queen who was slain by Horne’s ancestor, and is cursed by vampires that are always on the look out for fresh nubile blood, and more importantly the blood of the vampire queen’s slayer’s descendants so that she can be resurrected. 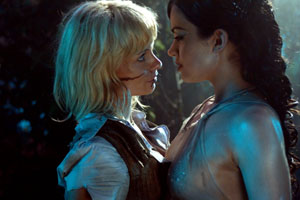 Needless to say, there ensues plenty of GoG action, semi-naked women and the odd bit of vampire slaying (as an aside, in the latest comics Buffy has turned into a lesbian vampire killer – and that’s not a killer of lesbian vampires).

This is not a great movie with artistic integrity, or even one that does much for vampire mythology, and I don’t imagine it was ever intended to be. It is a bit of mindless entertainment with plenty of dick jokes and slapstick humour, some of which are very funny. This will appeal to a huge number of people, and there is nothing wrong with being entertained at the cinema. Plus, it is a nice to see that type of comedy movie that is British and not from Judd Apatow and friends.

Lesbian Vampire Killers is on general release from Friday March 20.