By Jacqueline B. Frost 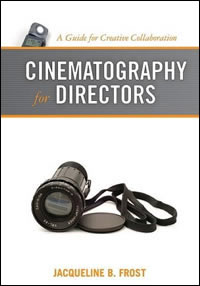 As the book tells us in the introduction, in the very early years of the film industry, the Director and the Cinematographer were one and the same person. As the industry grew and the job of the Director became so much more involved with the entire film making process, so the work of the cinematographer became the much more specialised task it is today but the relationship between the two remains unique in film making and is at its best when both parties recognise the story-telling abilities of the other and are prepared to go beyond mere collaboration to make it work regardless of whether they are making a $200m blockbuster or a $250k micro-budget indie.

This is a well-ordered book that takes the reader through the process of the cinematographer from the beginnings of looking at the script through choice of lens, colour palette, lighting for genre, movement, right through post-production. What makes it interesting is that while writing about each of these topics, and much more, we are also reading a series of interviews with leading cinematographers, discussing their relationships to directors they have worked with, the issues that came up during filming and the approaches they used to achieve the desired results. While these are interesting in themselves and in so many ways, as usual it is the anecdotes and occasional asides that often make the most profound impact.

Refreshingly it doesn’t just cover old ground and old movies, there are a lot of modern classics in there which makes it accessible for young film makers and it is packed with great photographs and strong examples to illustrate the points being discussed.

As much as it is intended to help people understand what exactly it is a cinematographer does, how their impact is seen on everything that happens on the screen, it’s main aim is to help Directors communicate their concepts and their vision in such a way that they can be fully realised on the screen. From that perspective – and bearing in mind that as far as I know it’s only book to cover the relationship between the director and cinematographer – it is an absolute must-have for any aspiring film makers book shelf.

, Blackwell and all good bookstores.