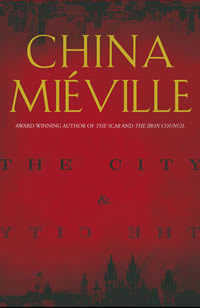 A new book from China Miéville is always something to look forward to and with The City And The City, once again, he doesn’t disappoint. Essentially a noir-ish detective novel what sets it apart is the authors fertile imagination, giving us a unique setting against which to play out the story, lifting it above the morass of other pulp detective novels and giving the reader something to think about long after he’s closed the book on the final page.

The story opens with the discovery of a young woman’s body in the city of Besźel and for Inspector Tyador Borlú of the Besźel Extreme Crime Squad it looks, at first glance, like a routine murder investigation. When it transpires that the dead girl was resident in Besźel’s dopelganger’d city of Ul Qoma and it could be a clear case of ‘Breach’ – when a resident unlawfully crosses the spatial boundary from one city to the other – he resolves to turn the case over to Breach for investigation and move on. However things take a very different turn when he discovers that the girl was transported across city lines legitimately, and someone has gone to a lot of trouble to ensure that there was no breach and and as he continues to investigate he finds himself drawn into a conspiracy a lot more dangerous to himself and to those around him than he could ever have imagined.

Right from the off I’ll say that, as detective novels go, The City And The City is passable and while the motive for the crime is not great, it’s certainly plausible and the ending is kind of what you’d expect to happen. That’s not to say it’s a bad book, far from it, but decent crime novels are hard to write so you need something different and that’s what Mr Miéville gives – in spades.

What makes this book fascinating is that the two cities of Besźel and Ul Qoma exist in the same space, sitting one atop the other, and residents of each city have been trained since birth not to notice the other for fear of ‘breach’, the movement or acknowledgement of the other city that is punishable by the folks known only as ‘Breach’ who investigate and severely punish transgressors. Functionally each city is different. They have different architecture, different currency, they work completely independently but they have to avoid collisions while driving in the same space and avoid noticing each other as they walk the same streets; it’s this setting that makes The City And The City such a compelling read.

The day-to-day lives of the City and the City would be fascinating enough, but once you add-in the politics surrounding the two, the archaeological finds that the two cities continually fight over, the nationalist groups of both cities aggressively trying to assert dominance over each other and the weird tales of pre-Cleavage history then the world itself becomes the star of the show and I for one could have continued reading about it for a lot longer.

The book itself is well written, as you would expect, and the characters are, on the whole, nicely rounded and believable. The plot unfolds in unexpected ways and there are moments of genuine excitement as the investigation progresses but it’s the setting that keeps you gripped and, at times, I could genuinely see this as a totally compelling cop-show for the 21st century (I live in hope!).

Once again China Miéville has proven that he is one of our most exciting contemporary science-fiction/fantasy writers and while in truth this isn’t the best crime novel you’ll ever read, it’s certainly a terrific addition to the Miéville canon.

The City And The City will be published in May 2009 by Tor through Pan Macmillan and is available to pre-order now from Play.com, Blackwell and all good book stores.