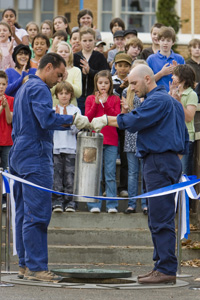 It doesn’t take a great deal of imagination to see that humanity is in an end of days scenario. The old systems are crumbling, greed is rampant, the ecology is breaking down, and totalitarian governments are taking over, disguised as caring democracies – basically, the world is going to hell in a handcart. It really is like a big sci-fi movie, which could explain why Alex (I, ROBOT) Proya’s latest movie, KNOWING, has been such a huge hit in the US during its first week of release, because people can relate to it.

The premise is fairly simple. In 1959 a young schoolgirl, Lucinda, suggests that a time capsule be buried in the school grounds as part of the school’s inauguration, to be opened in 50 years time. In the capsule all the students have to put pictures of what they think the future will look like when the capsule is opened, except Lucinda puts in a page of seemingly random numbers. 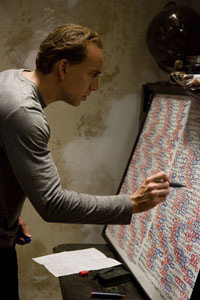 Fast forward to present day and the time capsule is opened and young Caleb Koestler gets Lucinda’s envelope. His father John (Nicolas Cage), a scientist and lecturer, discovers a pattern in the numbers that give the dates of disasters and the numbers of deaths, and there are three left so John tries to find out what they are and a way to stop them, by enlisting the help of Lucinda’s grown-up daughter (Rose Byrne) and granddaughter.

Generally I have a rule of not revealing too much of the plot or giving any spoilers, and in the case of this movie it does make it kind of hard to give a full review because the parts that are worth talking about are also have some of the biggest faults. Suffice to say, that there are some spectacular special effects as Cage does his best to stop the inevitable. Cage’s acting is all a bit earnest, as we have seen in most of his recent films, and he is outshone by the two children. For the most part the story is fairly good, even if the dialogue is a bit weak in places, and there is a bit too much forced schmaltz. Unfortunately, it is the ending that lets the film down, and if you want to have a successful film the ending has to be strong. SLUMDOG MILLIONAIRE is a case in point. It is called a feelgood movie, but it is only the last act that is feelgood, the rest of the film is actually brutal, but everyone remembers the happy ending, even if they didn’t like the musical Bollywood finale. 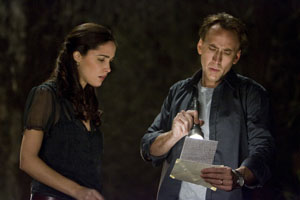 I think what annoyed me most about the ending was that part of it was typical Hollywood, and part of it was more European, and it was the Hollywood part that was filled with obvious symbolism, and an almost deus ex machina devise that made me realise that most of Americas problems are because they are incapable of introspection, and really think that they can only be saved by an outside force. This will make more sense if you see the movie, but that is not really a good enough recommendation to see it.

Actually, the movie does have some good set pieces and a few good psychological thriller moments, but despite a good premise it is far from being a perfect movie. However, if you are looking for something to see at the cinema this week then, for genre fans, this is by far the best release of the week – just don’t go in with any high expectations.

As a note for all you techno buffs and filmmakers, this was shot entirely on a RED camera, so it is worth looking at from that standpoint.

KNOWING is in cinemas now