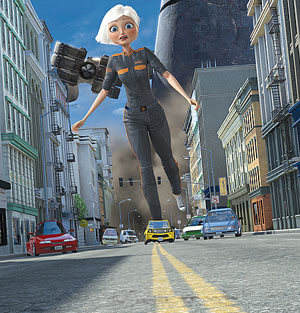 Dreamwork’s latest animated spectacular, which provided the 10th Leeds Young People’s Film Festival with a very popular opening night film, pretty much does what it says on the tin. In fact it’s so formulaic that you can imagine it on the supermarket shelves now: “Monsters vs. Aliens. A film about some monsters fighting aliens. Ingredients: Zippy and clean computer animation, a few famous actors larking about whilst providing voices, lots of visually exciting characters and sequences and a few jokes that are designed purely to make the adults in the audience laugh.” But, even though Monsters vs. Aliens is far from being gourmet food, it’s enough of a tasty treat to be satisfying.

Susan’s wedding day is slightly marred when, after being landed on by a stray asteroid, she grows 49 feet tall. Enter the military, who promptly capture Susan, rename her Ginormica, and place in her a secret government base. She shares her new home with Dr Cockroach, The Missing Link, and the indestructible BOB, and is soon resigned to spending her life with her strange new companions. But when alien Gallaxhar threatens the planet, the monsters are released and set to do battle with the invaders.

There’s plenty to like about this animated romp. The voice cast throw themselves into their roles, with Hugh Laurie enjoying playing mad scientist/insect Dr Cockroach – and probably confusing US audiences with his English accent – and Keifer Sutherland sending himself up something rotten as General WR Monger (do you get it? DO YOU!). There’s also a nice ‘B’ movie vibe to the proceedings with some fun jokes aimed at genre fans (including a warning to institute a ‘Code Nimoy’), a number of well-paced comedy and action moments and some very funny references to the likes of Close Encounters of The Third Kind and Dr Strangelove (which none of the young audience had a clue about).

But that’s about it really. Stretched attempts at pathos aside (yes, you guessed it, according to the film we’re all the same underneath, whether human or monster) this is really an extended Saturday morning cartoon that whizzes past, gets the youngsters all excited and then ends without leaving much of an impression on the memory.

But considering all the youngsters who saw the film loved it and clapped rapturously after the end, the fact that I thought it was enjoyable but flimsy could be a sign that I am merely getting old. After all, I remember when animated films used actual drawings…

Monsters vs. Aliens is on general release from Paramount Pictures now. Go to www.monstersvsaliens.com