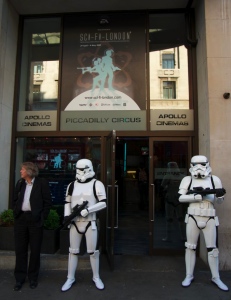 SCI-FI-LONDON 8 kicked off this evening with the Arthur C Clarke Awards and the world premiere of EYEBORGS. The doors opened at 6pm, ably guarded by our friends of the UK Garrison of the 501st Legion: Vader’s Fist and the bar quickly filled with Clarke Awards attendees and revellers along for the opening party, including unexpected guest William Hurt.

As the food started to run out and the drinks fridges emptied, the crowd filed into the Apollo Piccadilly’s screen 4 for the Clarke Awards ceremony. After lengthy deliberation by the panel over the last few weeks, Ian R MacLeod took home the prize for his novel ‘Song of Time’.

While the ceremony went on the cast and crew of EYEBORGS assembled in our VIP lounge, ready for the world premiere of their film. After a few photo ops the film kicked off to a full screen, opening this year’s festival film programme. 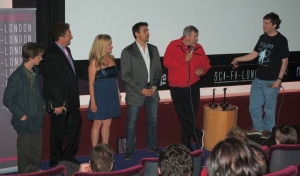 The Apollo has now wrapped for the the night, ready for tomorrow’s Geek Girl Dinners talk and showings of Cyborg She, Hardware (with an intro by Kevin O’Neill) and the first part of this year’s short film programme.

Keep an eye on our Twitter stream and flickr group for updates and pictures from the festival. Also, congratulations to our competition winners, Karen and Adrian, who got the chance to come along for the opening party and film.