The second day of SCI-FI-LONDON is now done and despite traditionally being the quietest day of the festival we managed to pack rather a lot in. 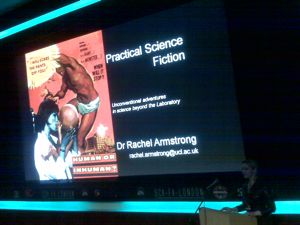 Our friends from the 501st Garrison returned, this time led by the Dark Lord himself, Darth Vader, guarding the door and guest list, and first up was the opening event of our Lab program. Dr Rachel Armstrong, coordinator of the science strand, led off with a well-received talk to the London Girl Geeks Dinners group entitled ‘Practical Science Fiction: Unconventional adventures in science beyond the laboratory’. Rachel’s science programme continues on Saturday May 2 at 11:30 with our first panel – “Is there really anybody out there?”.

This led into the first film of the evening, the UK premiere of Japanese production Cyborg She, billed as a “sci-fi fan’s date movie”. It’s beautifully presented with great performances and a mix of science fiction and romantic comedy. If you’ve missed it this time don’t worry, as we have a second showing on Sunday morning at 11:40am. 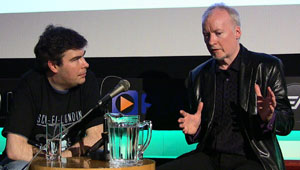 Our second film event of the evening didn’t quite go as planned, with the screening of two short films to the eager audience before festival director, Louis Savy, came out to announce that Kevin O’Neill, our guest speaker at the screening of Hardware, a film based on his comic Shok!, was lost somewhere in a cab between Waterloo and the Piccadilly Circus – he had seemingly been picked up by a black cab driver who didn’t know the location of this major London landmark. A quick vote from the audience decided that we’d launch straight into the film and chat with Kevin after the movie, but he arrived moments later and, after pausing the film, launched into a Q&A compered by SFL regular Alex Fitch.

The festival kicks it up a notch tomorrow evening, with zombie pair Yesterday (with a Q&A with director Rob Grant) and Mud Zombie (Brazil’s first zombie flick), and a special showing of The City of Lost Children introduced by co-director Marc Caro.