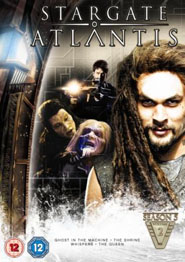 Another four episodes of the fifth and final season popular sci-fi series have been released on DVD. This second volume contains the episodes Ghost in the Machine, The Shrine, Whispers, and The Queen. Maintaining the high production values that are the hallmark of the series, the show’s creators continue to explore new ideas, including the fogbound horror episode, Whispers. This episode also features on the Mission directive, behind the scenes special feature. Other extras include: a conversation with Joe Flannigan, who plays Colonel John Sheppard; more behind the scenes footage about submerging the Stargate; along with episode commentaries.

There is also more online content that can be accessed through the exclusive decoder card included with every DVD.

To win a copy of the DVD click the link below.