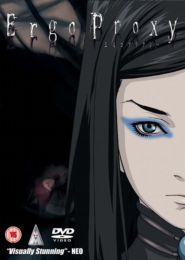 Synopsis:
The citizens of Romdo, one of the last enclaves of the human race, live an ideal life. Their city’s immense protective dome seals them off from the deadly and desolate word outside whilst their robotic autoreiv servants nurture them and provide them with everything they could ever imagine. Indeed, Romdo seems to be a paradise, an ideal utopia where they need not bother to think nor feel nor will they want for anything. But this perfect world is threatened from within when a virus, dubbed “Cogito”, starts to spread throughout the android population of the city making them unpredictable, dangerous and at times deadly. Inspector Re-l Mayer, a feisty young detective from the Civilian Intelligence Office is tasked with investigating any murders committed by these infected robots. As Re-l delves deeper she finds that the virus spreading thorough the city’s robots is just the tip of the iceberg and is shocked to discover that the idyllic society that she and every other inhabitant of Romdo are part of is based upon lies, conspiracy and a mysterious entity know as the “Proxy”. When an immigrant by the name of Vincent Law escapes from the city after being framed for treason, Re-l joins him, and an infected autoreiv called Pino who escaped with him, on a dangerous journey which leads her to not only explore the forbidden world outside Romdo but also to question her purpose in the grand scheme. Together they attempt to discover the true nature of the Proxies and how exactly they relate to the continued survival of the human race. 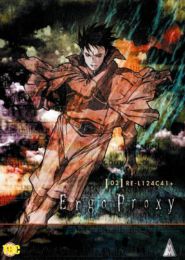 Comments:
To put it bluntly, Ergo Proxy is a complete stunner of an anime. It’s engrossing, visually astounding, beautiful to listen to and gives the old grey matter one hell of a work out. If you liked anime such as Witch Hunter Robin, Ghost in the Shell: Stand Alone Complex or the more serious episodes of Cowboy Bebop then this show is for you. Even for those who are not anime fans then if you like movies like Blade Runner, Logan’s Run, Minority Report or Brazil then this show is still for you. If you still need any more encouragement then the fact that when this show first came to DVD back in 2007, SFL’s Online Editor, who himself freely admits he’s not much of an anime fan, felt not only compelled to watch it but also to write a positive review on it (which can be found here ) must say something about the appeal of this show.

Surprisingly most of the inspiration for this show seems to have come from outside of Japan, instead being pulled from Western literature, art, movies, philosophy and theology. There are references, some subtle some not so, to the works of great western philosophers, artists, psychologists, authors, directors and the like. The aforementioned Blade Runner and Brazil are all homaged as well as a scene that harkens back to the “Odessa Steps” sequence in the 1925 silent classic, Battleship Potemkin. Fans of novels 1984 and Brave New World will feel right at home here as much of the “utopia” enjoyed by the citizens of Romdo owe much to the dystopic views put forth by these works. There’s also a real feel of some of the darker “superhero” comics such as Watchmen and V for Vendetta flowing throughout this show, not just in it’s script but also in its stylistic visuals. There’s a myriad of references to well know pieces of art such as Michelangelo’s sculptures and “Ophelia” by Sir John Everett Millais, conversations revolving around the human condition harking back to noted thinkers and philosophers such as Sartre, Nietzsche and Descartes and questions on psychology looking towards the likes of Jung, Pavlov and Freud, Interestingly, the technology presented in this future world isn’t too dissimilar to what we’re seeing today. It’s as if the designers for this show have taken something we use every day, like a mobile phone or a laptop, and then advanced it through a couple of dozen version upgrades which helps to present this vision of the future as essentially an upgraded and enhanced though still familiar version of here and now. Scattered throughout the show are clues regarding the nature of the Ergo Proxy universe and the truth behind the proxies. Look up the names of almost anything you come across, be it those of thing, people or places and you’ll find that almost all of them have real world meanings that somehow relate to the plot. Much like when watching The Machinist, the real smart-arses in the audience will probably twig onto what’s going to happen long before the big reveal takes place. 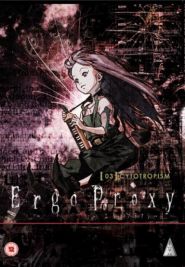 Much of the show’s run is taken up with the three main characters embarking on a lengthy journey, both physical and emotional. Whilst the main thrust of the story is about Re-l accompanying Vincent and Pino to Vincent’s home city, along the way they all evolve through their interactions and discoveries, not only about themselves but also about each other and the strange and decrepit world around them. While each of them has a journey of self discovery to take it may seem at first glance that Pino’s journey isn’t as important as those of the other two but this isn’t the case. While Vincent and Re-l have to evolve as people, Pino, who is essentially an android in the form of a young girl who’s recently gained a soul, evolves into a person much like her name sake Pinocchio and his quest to become a real boy. This all could lead you to believe that this is a very “talky” show, which it is. This isn’t to say that there’s no action as thankfully there’s plenty going on inbetween all the talking and let’s face it, who needs an animated Solaris. Chief Scriptwriter Dai Sato has also scripted episodes of Ghost In The Shell: Stand Alone Complex and Wolf’s Rain while Director Shuko Murase previously helmed Witch Hunter Robinand if you’ve seen any of these shows you’ll can probably figure out what level of dialogue vs. action you can expect here.

Visually the animation in this show has left no expense spared. The three main characters must have the largest repertoire of facial expressions I’ve ever seen in an anime and some of these expressions are so subtle and detailed that if you blink you may miss them The animation is always fluid and the backgrounds, even those only seen for a scant few seconds, are incredibly detailed. There are a number of instances where the animators haven’t included something because they should or because they had to, the scene would have worked perfectly well without it, instead they’ve included something because they wanted to or just because they could. It’s these little inclusions and the attention to detail, little things like reflections and shadows, which carry this show up visually from being good to being great. The colour schemes are generally very dark and muted with heavy use made of shadows and silhouettes leading to a very film noir feel at times. One of the few times you’ll see any bold colours are in extreme close ups of the main characters eyes, of which there are many in what seems to be somewhat of a leitmotif for this show.

Aurally this show is a real treat. While the original Japanese language version is excellent, the English language version as directed by Jonathan Klein and adapted by Taliesin Jaffe (the man behind the English language version of Hellsing and BECK: Mongolian Chop Squad) is easily one of the best dubs produced in recent years. Unless you’re able to speak Japanese fluently or are really well practised in managing to read the subtitles whilst capturing absolutely everything that’s going on visually (a harder feat than it sounds) then I’d strongly suggest going with the dubbed version. There’s just so much going on at any one time that it’s really easy to miss something important if you’re not looking in the right place. It also helps that the dub cast are not just good, they’re impressively good. Worth a special mention is Pino’s dub actress who manages to pull off what is essentially an inquisitive and pre-adolescent girl, albeit a robotic one, without being annoying or whiney. Both the voice actors for Re-l and Vincent are also very believable in their roles and I’d hard pressed to think of any other two actors who could have done it better.

The musical score, ranging from soaring orchestral to punchy electro-pop to resplendent choral as well as utilising a lot of modern compositions with a decidedly classical foundation, is equally impressive and is handled by the same composer behind the score for the upcoming Blood Live action movie. Acting as the show’s opening theme is “Kiri” by popular Japanese band Monoral and closing the show is the wonderful “Paranoid Android” by Radiohead. Both tracks are excellent choices, fitting the mood of the tale splendidly and lyrically foreshadowing elements of the show’s plot. 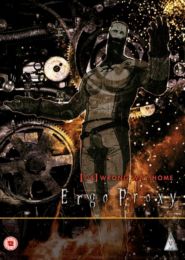 If I had to point out a down side to this show it would probably be this: Ergo Proxy’s strengths can at times also be its weakness. Dark and moody animation is all well and good but at times there’s whole scenes that are so dark and moody that you’ll be left in a mad scramble for the TV’s contrast / brightness controls just so you can see what the hell’s going on. Also, I’d suggest that if you’re going to watch it over a lengthy period of time that you keep a notebook handy as you’re probably going to need to make some notes along the way. Lastly, sometimes it’s just too damn clever for its own good as there’s a lot of clues and references that can be easily missed if the viewer isn’t paying 100% attention.

They say you often get as much out of fiction as you put into it and with Ergo Proxy that’s certainly the case. There may be some scenes that have to be watched more than once in order to be grasped completely, and the series as a whole involves a host of mental gymnastics from the viewer, but what it gives in return is an exciting and well-constructed suspense thriller that’ll keep you hooked all the way to the end.

Extras:
While each of the six discs contains a pair of trailers, all of the other extras are compressed onto the first disc which contains: a “Keywords Of Ergo Proxy” featurette; Behind the scenes with the Japanese animation studio featurette; English Staff Interview (which I really recommend isn’t watched until at least the end of the second disc as it gives a lot of early plot away); Clean Openings for episodes 1 and 2; Original Japanese TV Commercials; Production art galleries.

Ergo Proxy: Box set is available now from the likes of Amazon, Play and most high street retailers.