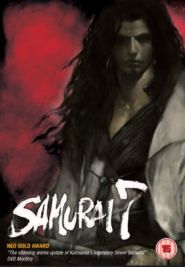 Brief synopsis:
In a futuristic world where swords and samurai share the scene with fantastical technology and flying war-mecha, acclaimed anime studio GONZO brings us an update to Akira Kurasawa’s classic Seven Samurai.

It’s been five years since the Great War ended but the cessation of hostilities has done little to bring peace to the land. Once proud and mighty warriors now scour the land as lawless bandits, stealing what they can from the hard working villages and killing all those who oppose them. Once such village decides to make a stand and sends their beloved Water Priestess to the nearest major city to seek the aid of any samurai willing to risk their life to defend them in exchange for nothing more than a few bowls of rice. There she finds a novice warrior looking for a chance to prove his honour and a battle weary veteran with a track record of never picking the winning side. Two samurai become three, then four, until eventually they have seven samurai willing to aid them. But will it be enough to save their land, their homes and their very lives?

Comments:
There’s been a number of “re-imaginings” of older works over the last few years to the point where it’s become somewhat of a fashion. Some of these offerings have worked impressively and surprisingly well such as Battlestar Gallactica’s triumphant return to the small screen and a what many are calling a “franchise saving” return to the big screen for Star Trek. Some however, are less inspiring and feel more like a flimsy attempt by big business and/or desperate studios to dig up our golden childhood memories, tart them up a bit and flog them back to us for all they’re worth. **cough cough** The Dukes of Hazzard, The Day The Earth Stood Still, Transformers **cough cough**. Ahem, sorry about that. This re-imagining of Akira Kurasawa’s classic Seven Samurai however, while far from awe inspiring, still falls squarely towards the “doesn’t suck” end of the spectrum, which is one hell of a relief. 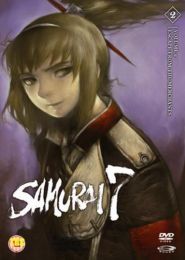 It takes some balls to tackle a re-imagining of a classic movie, especially if the movie in question is Seven Samurai, easily one of the most influential movies of the 20th century. In this case, not only is this classic being remade, it’s being **gasp** extensively altered and expounded upon. Gone is the 16th century setting to be replaced with a futuristic steam punk world, though still heavily influenced by feudal Japan. The story itself has been expanded and updated for the 21st century and, while not necessarily better than before, it is definitely bigger and brings a whole lot more to the table in terms of story and character development. This also isn’t to say that it abandons the original as many characters, lines and even entire scenes are carried straight out of the original.

Visually, the first sixty seconds of screen time are, to be honest, a bit crap quality wise but then the big money-shot kicks in and we have 5 minutes of pure eye candy. It’s a bit like the start of Team America where you’re initially disappointed but then they pull back to say, “hey, fooled ya, look what we can really do”. Unfortunately it doesn’t stay that way for long as GONZO can be a bit hit and miss when it comes to animation quality. I’ve previously seen shows from almost all studios fluctuate in animation quality between episodes, or even between scenes but never have I seen such abrupt changes within a single scene before. The 3D integration is better here than in some of their later shows such as the god awful Blassreiter, but will never be as seamless as work from the likes of Production I G. GONZO seems to spend it’s time recently trying to be the new Production I G or Gainax but never quite manages it, leaving them somewhat relegated to the proverbial Jack of all trades of anime. Poor old GONZO; always second best no matter how hard they try. It’s a shame really as had the production quality been consistent across the board then this show would have had a much better shot at true greatness.

The Opening and Closing animation are overlaid with very impressive Japanese kanji, which MVM aren’t dumb enough to mess with. Actually, there are no English credits to be found anywhere on these DVD’s apart from those for the DVD authoring which is kind of odd. Usually the ADR team make a big thing about getting the best position in the end credits but for this release they’re totally absent. 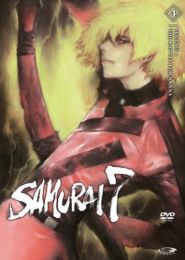 One thing I have to point out about this show is that the Dub and Sub versions are so different in both tone and content that it’s really worth watching some parts twice to get the full value of this series. As is the case with many other series such as Bleach where a heavy emphasis is made on the concepts of Honour and Bushido the sub stays truer to the original Japanese in intent and feel with all the honourifics left intact while the dub is a touch more humorous, casual and, dare I say, “Americanised”.

Actually, while I’m talking about honourifics I’m going to spend a bit of time on what was my biggest bug-bear regarding this show’s dub track, i.e., their total lack of consistency re prefixes and suffixes. Basically, the dub has some of the characters using honourifics only some of the time. Even then they’d keep bouncing back and forth between western style prefixes such as “Lord” or “Lady” and Japanese style suffixes like “-sama” or “-dono” which left me wanting the scream at the TV “For Pete’s sake, pick a convention and stick with it, you morons” or something like that.

Apart from that though the Dub is actually rather good. It’s no surprise to hear Colleen Clinkenbeard as the female lead as it seems that over the last year or two she’s somewhat supplanted the likes of Amanda Winn Lee or Wendee Lee as the world of anime dubbing’s golden girl. Not that it’s undeserved as she does play a good “empowered young woman with plenty of guts and not too much whine” and also makes a capable ADR director to boot. The rest of the cast are also good generally restrain themselves from heading into OTT territory, which would be all too easy to let happen when you’re dealing in samurai’s and swordfights.

The soundtrack is very impressive. Apart from the opening and closing themes, almost all of the compositions used in this show are in traditional Japanese style. There’s extensive usage of taiko drums, wood flutes and shamisens. Anyone who’s ever witnessed a performance by either the Kodo Drummers or Yamato when they’ve made one of their regular and incredibly popular visits to our shores will find these works very familiar.

Extras:
There’s not the most impressive array of extras in the world. We’ve got the almost obligatory two trailers per disc, character profiles, the original Samurai 7 promos, a trailer for Akira Kurasawa’s original movie, a Director/Actor commentary for ep 14 and versions of the opening and closing animation with the Japanese kanji removed – you get these seven times each which seems bit like overkill to me. This release also comes with a pair of art cards and is packaged in seven (yes, they made sure there were seven on purpose) thin-pac DVD covers in a sturdy and very striking cardboard box.

Samurai 7 – Box Set is available now from most high street retailers as well as from online stores such as Amazon and Play,