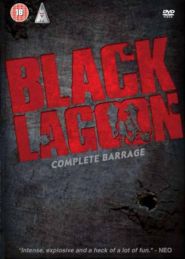 Brief synopsis:
Lowly and unassuming office worker Rokuro Okajima thought it’d be a nice, easy business trip trading his boring desk in grey and dreary Tokyo for the crystal blue waves of the South China Seas. Little does he know that the ordinary looking CD-R he’s been tasked with transporting on his little business cruise is actually in somewhat high demand amongst the South East Asian criminal underworld. Quicker than he can say “One deckchair and margarita, please” he’s taken hostage by the Lagoon Company; a trio of sometimes pirates who are tasked with removing the disc from Rokuro’s possession and presenting it to the local branch of the Russian Mafia. When the deal goes sour – and both the pirates and their hostage find themselves the target of a group of vicious and well equipped mercenaries sent to destroy the data by any means necessary before it can fall into the wrong hands – captors and captive join forces in a desperate attempt to stay alive. So begins Rokuro’s new life as a member of the Lagoon Company with Dutch, the boss, ex-US Marine and Vietnam veteran; Benny, a technical genius on the run from both the FBI and the Mob; and Revy, their foul mouthed, short-tempered psychopathic weapons expert. How long a well-mannered, white-collar worker like him will survive in this crazy cut-throat world that is Roanapur, otherwise known as Thailand’s city of sin, is anyone’s guess. 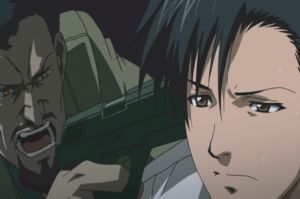 Comments:
Summer 2009 saw the six discs that make up this box-set being released as two separate three disc box-sets, one for each of the two 12 episode seasons or “Barrages” as this show likes to call them. Our SFL review for Season One can be found here and Season Two’s here. Content-wise the DVD’s themselves are identical as to what’s on offer here. In fact the only noticeable difference is that this release comprise all six discs, each with their own thin-pak case, all wrapped up in a sturdy cardboard sleeve. Plus the price is £10 cheaper than the two previous sets combined. However, If you go hunting around there’s sizeable discounts to be had not only on this release but also on last years box-sets.

Extras:
Apart from the standard pair of trailers per disc, there’s also the original Japanese version of the opening title animation, a text-less version of the closing title animation, the original Japanese music video for the opening theme song and a rather interesting “Making of” featurette with the English language dub cast

Black Lagoon – Complete Barrage Collection will be available from most high streets and online retailers from 15th February 2010. 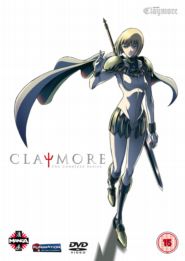 Brief synopsis:
Based on a popular and long running manga of the same name, Claymore presents a dark, disturbing and violent tale set in a medieval fantasy environment where immensely powerful warrior woman travel the lands ruthlessly destroying humanoid monsters which threaten to decimate entire villages in some of the most brutal and gruesome ways known to man. However these swordswomen, known to the public as “Claymores” after the immense swords that they wield, aren’t defenders of justice or champions of the people, they’re agents for “the organisation” and they themselves are hybrids, part human, part monster. As the old saying goes, “send a monster to fight a monster”, and The Organisation knows only too well that it can extract a hefty sum from any village in need of the monster slaying services of it’s operatives. Though they themselves are feared and despised by the general population almost as much as the monsters they are sent to defeat, these women put not just their lives on the line every time they fight these monsters, but also their very sanity and humanity as they also battle to control their own monstrous nature. This monster in each of their hearts grows ever more powerful with every battle and will one day take them over from within, turning them into the very things they live to destroy.

One of these Claymores, a beautiful yet emotionally detached young woman by the name of Clare, saves a young boy from a monster attack. When his fellow villagers shun him after the attack, Clare reluctantly agrees to escort him to the next village in the hope that someone there will take him in. As they journey together, Clare finds that interacting with a regular human who finds her neither disgusting nor terrifying begins to reawaken the compassion and basic humanity she had abandoned so long ago. 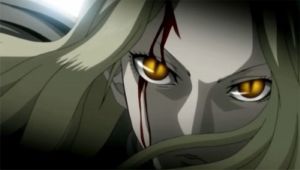 Comments:
All three of the previously released twin-packs compressed into one double width DVD case and containing almost 10 hours of this magnificent dark fantasy adventure anime and it’s associated extras. You can find our SFL reviews of the Vol1&2 and Vol3&4 twin-packs here and the review for the Vol5&6 twin-pack here and the official English language site here.

Extras:
There’s Audio Commentaries for half a dozen of the episodes; the ever present Textless Opening (Raison D’etre) and Closing (Danzai No Hana); Audition tapes for five of the Dub cast members; interviews with Sound Director Yasunori Honda and Art Director Manabu Otsuzuki and a rather interesting interview with Director Hiroyuki Tanaka; Original TV adverts and a Production art gallery.

Claymore: Box Set will be available from most high streets and online retailers from 1st February 2010 with the usual discounts to be found for shopping around.