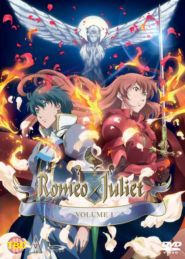 Brief synopsis:
Until just fourteen years previously, the House of Capulet had ruled the aerial city of Neo Verona with great benevolence and respect for its citizens. All that was to change when the house of Montague, which had long held a grudge against the city’s ruling family, spearheaded a bloody coup and seized power by ruthlessly slaughtering the entire house of Capulet as well as all those allied with them. But, unbeknownst to the Montagues, there was one lone survivor of this horrendous act of mass murder. A daughter of Capulet, the young Juliet, was rescued and has lived in secret for the last fourteen years safe amongst those still loyal to her house. Raised as a boy by the name of Odin, Juliet leads yet another secret life as The Red Whirlwind; a disguised vigilante figure who fights to defend the common people against the injustices forced upon them by the despotic and brutal regime of Neo Verona’s ruler of these past fourteen years, the tyrannical Prince Montague.

Now, as her sixteenth birthday fast approaches, Juliet’s guardians believe it is time for her to be told of her true identity and lineage and for her to become a figurehead behind which the House of Capulet can rise again. But a chance encounter has already lead the young Juliet to meet and fall for a young noble by the name of Romeo, although she is as unaware of his true identity as the son of Prince Montague as he is of hers as the sole survivor of the House of Capulet. When Lord Romeo finally discovers Juliet’s true gender he become infatuated with her in return but by this point she has learnt the truth of not only her own lineage but also that of her first love. Devotion, loyalty and love are all pushed to their limits as history’s most popular star crossed lovers take on their tragically familiar hand as dealt to them once again by the fickle hand of fate in this beautifully animated and highly original anime adaptation of Shakespeare’s timeless classic “Romeo and Juliet”. 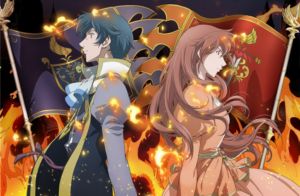 Let’s get this out of the way first. There’ll probably be a number of people who see this review posted up here and the first thing through their mind’ll be “Romeo and Juliet?! What the hell’s that doing here and not on www.girly-romance-london.com?”. Well I’m here to say that it’s definitely no mistake as the location for this story, the city of Neo Verona, floats unaided in the sky, plus – and I kid you not on this bit – Romeo and his fellow nobles ride around on magical flying ponies. Well if that doesn’t count as the “fantasy” part of “Sci-fi & Fantasy” then I don’t know what does. And on the girly-romance front; trying to write this anime off as a “girly” anime is like trying the write the original off as a “girly” play and anyone who chooses to pass either version over as it’s not “manly” enough for them probably wasn’t going to get much out of it anyway.

So that aside, what of it? Is it any good? Well actually, yes, it is. Production company GONZO’s tried it’s hand at fantastical and futuristic adaptations of well loved classics before such as Gankutsuou which was based on the novel The Count of Monte Cristo and Samurai 7 based on Akira Kurasawa’s classic movie Seven Samurai, both to a generally positive reviews. This time they’ve enlisted as Director Fumitoshi Oizaki – probably best know as the Animation Director on Final Fantasy: Unlimited – and respected script writer & manga author Reiko Yoshida to handle the series composition. From watching the first volume it’s evident that GONZO are giving this series their full attention. The animation’s of impressively high quality all the way though, the CGI integration – which GONZO are known to be quite variable on – is fluid and not over used, the characters are engaging and the script’s interesting, humorous and entertaining. As long as they keep this up and don’t drop the ball by doing something stupid at the last minute – another of GONZO’s known failings – then this show has the potential for greatness.

But, and here’s the thing, if you’re expecting this show to follow the original closely then you’re going to be right out of luck. If you think Baz Luhrman took a few too many liberties with his 1996 DiCaprio/Danes vehicle then you ain’t seen nothing yet. Romeo x Juliet is touted as being based “loosely” on Shakespeare’s play, and when they say “loosely”, boy do they mean it. While the basic settings and characters are taken from the play, it’s made quite plain right from the start that religiously following the original is definitely not on the agenda. That said there are a good number of plot devices, minor characters and references from the Bard’s other plays thrown into the mix that will keep many a Shakespeare fan happy. There’s even a character, a playwright by the name of William, who pops up in the proceedings from time to time to offer assistance, advice and the occasional musing on the human condition. 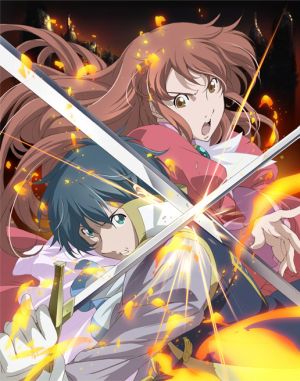 Now, here’s the thing that really impressed me. The dubbed version of this show isn’t just good; no, it’s much better than good and I’d go so far as to say it’s probably one of the best I’ve ever heard. While the subtitles basically just translate the Japanese language track into modern English, the Dub version actually reworks the story into something more akin to Shakespearean English with all the phrases and flowery language that goes with it. It’s not perfect by any means – and I dare not show it to any classical scholars in fear of the equally flowery language I’d be likely to hear flowing from their mouths about it – but it’s still a very credible attempt. It’s probably telling that the work on the English language script has been overseen by Taliesin Jaffe, the man behind the script work on two of the best Dub tracks of recent years; Ergo Proxy and the Hellsing OVAs. This script, plus some surprisingly capable thespian acting from the dub cast – many of whom were probably making their first re-acquaintance with the Bard since their college days – makes for one of the rare instances where the Dub is in fact far superior to the original Japanese language version. Of course, this isn’t to say that the Japanese version is no good, as this is just not the case. It’s worth noting also that the Japanese version uses primarily polite or formal Japanese, which is great if you’re attempting to learn the language or know it already and have become quite rusty, as this helps make it easier to follow without having to read the subtitles.

UK distributor MVM is releasing this show over the next few months on four separate DVD’s containing 6 episodes each. As usual, if you have a hunt around you can find there are some impressive discounts to be had on this great new series.

Romeo X Juliet – Volume 1 will be available from most high streets and online retailers from 15th February 2010. A trailer can be found on the official website for this series.