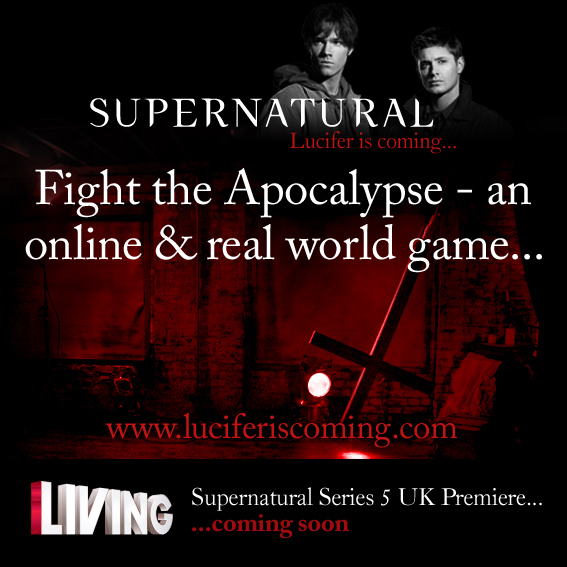 In 2009, Emmy Award nominated US drama Supernatural found a new home in the UK – LIVING. To raise awareness for the UK premiere of series five starting early Feb, LIVING is launching one of the UK’s most complex alternate reality games (ARG) ever, which will offer one viewer the ultimate Supernatural prize – a chance to appear in the show.

Supernatural season four ended in suspense as Lucifer was freed from hell and on LIVING season five follows Sam and Dean Winchester as they face their toughest battle yet; the apocalypse. To promote the new series, LIVING is creating the Fight the Apocalypse ARG, which calls on Supernatural fans to mobilise their armies and join the fight against Lucifer.

The ARG is based around collecting hidden symbols – ‘Enochian Sigils’ – which players must locate, photograph and send via MMS to a shortcode,. One of the first truly cross-platform campaigns of its type, the ARG utilises online, mobile, print and real world elements.

Enochian Sigils have been hidden online and at real world locations throughout the UK and clues to the Sigil locations will be delivered by Castiel (Misha Collins) in specially filmed sequences on the Fight the Apocalypse website. Once located, Sigils are photographed on any mobile device and using Image recognition technology – which recognises any image taken on a mobile phone camera – are uploaded to the player’s profile.

In the ARG players have two ways of making it to the top: locating and photographing Enochian Sigils, and building an online army of support. Players can invite friends to join their army via email and through Facebook. On the luciferiscoming.com website, Supernatural fans can create their own profile and contact friends to join their army, manage their game playing and collection of Enochian Sigils, as well as view other contestants’ profiles and join forces with other players. For fans who want to play on the move, all core game functions will be available on the mobile site.

The first clue to start the hunt will be released on the 20th January. Fans can pre-register for the game now at www.luciferiscoming.com.

** THE GAME IS ONLY ACCESSIBLE TO THOSE IN THE UK**