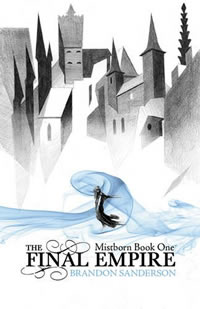 I’ve known about Brandon Sanderson for some time now through the ‘Writing Excuses’ podcast he presents alongside Howard Taylor and Dan Wells but I’ve not had the chance to read any of his work till now. Others may know him from the work he has done finishing Robert Jordan’s ‘Wheel Of Time’ series, I’ve not had the pleasure myself – largely because I’ve not read the series and felt no compunction to start at the end – but what he says about writing on the podcast makes perfect sense and the film rights have just sold to Paloppa Pictures so I had high hopes for ‘The Final Empire: Mistborn Book One’, and, with some minor problems, it absolutely makes for a good read.

As the novel opens we are introduced to The Empire, a thousand years of ash falling from the sky and no flowers or grass growing, this is a country of little light by day that is enveloped by mists at night. The Lord Ruler, having defeated The Deepness that threatened to destroy all mankind, reigns over the low-born Skaa with absolute power denying them freedom over their property, their women and children even their right to live. Feted as a God, The ‘Sliver of Infinity’, he cannot be killed though many have tried, and his will is overseen with brutal efficiency by The Steel Inquisitors, a terrifying priesthood possessed of uncanny senses and immense strength.

At the other end of the scale from the Skaa are the high-born nobles. Theirs is a life of total luxury, balls and parties, good food and good wine and plenty of servants to bring it to them. But there is a great deal of political wheeling and dealing going on under this grand facade, the various noble houses are always vying for power and constantly in flux, with factions and alliances springing up to win trade agreements or curry favour with The Lord Ruler.

Into this mix drops Kelsier. A thief who tried to steal from The Lord Ruler, Kelsier was caught and sent to work at the Pits of Hathsin, a deadly mine from which no-one has ever walked free. There he eventually ‘snaps’ acquiring his powers of ‘Allomancy’ – the ability to ingest different metals and ‘burn’ them to exploit different power characteristics. Using his new found abilities he eventually escapes, the only person ever to do so, earning himself a reputation amongst the Skaa as a potentially formidable foe for The Lord Ruler and amongst the noble houses of the Empire as trouble waiting to happen. Kelsier is hired by the Resistance to bring down The Lord Ruler. In order to do this Kelsier brings together his most trusted friends and colleagues, Allomancers all, and each bringing a unique ‘gift’ to the party. Kelsier convinces them that this cause is more than just a chance to turn the tables by promising them a caper that will set them all up financially for life and they agree.

The final piece of the puzzle is a street urchin called Vin. Vin has spent her entire life hiding and running, mostly in the company of her brother who taught her that everyone betrays you in the end so don’t get close, don’t trust anyone, and since he abandoned her she has been living amongst the thieves and low-lifes of the Skaa, taking beatings and hiding her femininity from them for so long that she doesn’t recognise kindness when it’s in front of her. Vin meets Kelsier and he recognises in her a latent ability as an Allomancer. He agrees to train her to use her talent, along with the other members of the crew, and she soon proves to have ability above and beyond what anyone could have anticipated. More than that though, for the first time in her life Vin starts to feel a part of something, something she has never known before, family.

So at first glance this looks like the most hackneyed of fantasy stories, the heroic rebel and his band of big-hearted rogues fighting against the forces of evil and the street urchin that turns out to be the chosen one, but despite the bargain-basement plot there’s a lot here to lift it above the morass and make it worthy of attention.

The single biggest achievement is the very clever magic system that Sanderson has constructed. Strictly speaking there are no Skaa Allomancers because population control should snuff out any possibility of a Skaa child that shows potential so a Skaa with any kind of ability needs to hide it from the authorities. This means it is a high-born gift that only the nobles should possess but even then, not every noble has Allomantic abilities. As for the Allomancy itself, there are a very few defined metals and each embues an Allomancer with a particular gift by ingesting and ‘burning’ that metal to harness it’s powers. The vast majority of Allomancers can only burn one metal successfully so they only have one power. A very few can burn them all and they are ‘Mistborn’.

Now, for each power there is an equal and opposite power, they ‘push’ off of one and ‘pull’ on it’s opposite number. One can help them sense Allomancy nearby and its opposite will help them block others from detecting their own use of power and so on. This system makes for some interesting abilities, ‘pushing’ off of a coin can help them jump as high as a building and pushing off a lot of coins in sequence enables them to travel great distances in very short time as if flying. On the other hand ‘pulling’ on something brings it towards you – or you towards it if it’s anchored well enough – so metal objects can be ‘pulled’ to slow a fall or control a landing. As a result of all this, Allomancers make sure never to have any metal on them or in their clothing as it can be used against them in a fight. This actually does make for some fantastically imaginative action sequences where every metal object in a room or in a street from the hinges on the doors to the nails holding the floorboards down can be used as a weapon, and one thing that this does really well is great fight sequences and seat-of-your-pants action.

The characterisation is also better than expected in most places, especially Kelsier. While he could be a gung-ho heroic favourite he’s actually painted much darker. He hates all nobles with a passion and kills them wantonly and without remorse along with their guards and anyone else who works with them – not the actions of a likeable hero – and he justifies this behaviour with wafer thin excuses about the evil of the Empire and the nobles being the Empire made flesh. But Kelsier, like all good characters, is not black and white, he is shades of grey, and through his relationship with Vin, the way he treats his crew and the Skaa he visits, Sanderson gives him the complexity that he needs so that we see good in him despite his worst actions. The same can be said for the rest of the crew who each have a distinct voice and characteristics that, while closely and obviously tied to their Allomantic ability, steer well clear of pantomime and never sink to the level of ‘also rans’. Even Vin, who starts of as sulking and untrusting and tomboyish and eventually grows into smart and trusting and pretty does it with some style and studiously avoids any ‘Ugly Duckling’ reveal.

The world building too is excellent, painting the landscape as drab and grey and bringing the city to life without bogging the story down with too much detail. We even get some small glimpses of the world beyond the city and there are one or two mystery characters that we need to know more about but really it’s just enough for colour, to keep things interesting.

There are, as I mentioned, some issues. There’s a half-hearted attempt to cobble a love story together between Vin and the son of a noble which is neither believable nor fully realised but the biggest downfall for me was also the biggest success – the magic system. In order to explain it we are treated to way too many passages of pure exposition, not quite in the “As you know, Bob…” vain, but often not far away. There are pages where it reads a bit like an Allomancers owners manual and a couple of times I felt sure that, after he’d had Kelsier or Vin perform some miracle feat, he’d had to go back a couple of chapters and shoe-horn in a passage of exposition just to foreshadow what he’d just written, it seems that obvious. I reckon The Final Empire could shave 100 pages off the word count easily if there’d been a bit more show-don’t-tell, but given that Mr Sanderson seems to be knocking out three books a year, not including the Wheel Of Time stuff, he’s maybe stretched a little too thin for much self-editing.

However, I’m prepared to look beyond this irritation because the book as a whole makes for a good read. The story is exciting, the characters are entertaining, the ending was different to what I’d expected so the surprise was cool and all-in-all I’m glad I spent the time with it. It also wraps up quite nicely so if you want to read the rest of the series you can, but equally you could walk away, happy that there’s no major cliffhangers to ruin your sleep. Yes, Mr Sanderson can definitely write, and if you’ve not read him before you’re in for a treat.

The Final Empire: Mistborn Book One is published by Gollancz and is available from Play.com, Blackwell, and all good book stores.

Brandon Sanderson has a website with a blog and he Twitters.