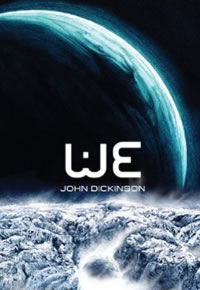 W.E. is that rarest of sci-fi novels, a very simple premise masking a deeply complex and multi-layered narrative that is utterly compelling from the first word to the last.

Paul Munro wakes up, post-op, after being prepared for the eight year journey to a distant moon to join the small team manning a base there. He was chosen. He had the skills, he had the experience. He was not asked. But the prep meant disconnecting Paul from the W.E. – The World Ear – and now, instead of being massively connected to everybody and everything, he feels utterly alone. He must learn to think for himself again, not search for answers from the W.E. cross-checking references and clarifying sources, he must even learn to speak again as most of his life he has not communicated using his voice.

Upon arrival Paul meets the three other members of the station, two female, one male. He is quickly overwhelmed at the amount of talking, the emotion, the volume. He has no social skills and cannot grasp humour, nuance, sarcasm as he has never had to and, as he learns to adjust, he soon realises that two of the team make a couple and there is an expectation that he will make one half of another. But there is more to this situation than meets the eye. The previous crew member killed himself in mysterious circumstances and there is an untraceable signal jamming parts of their communications with Earth. On top of that the station leader has it in his head that they are the last Humans left in the universe – real, unconnected humans – and he aims to bring others and begin the human race again, free of the self-imposed tyranny of the World Ear.

An absolute pleasure from the get go, this is cracking stuff. Beautifully written in crystal clear prose, you can practically put your finger in the spaces Dickinson has left to let the narrative breathe. So spartan and so cleverly constructed it gives the reader a real sense of being disconnected from everyone and everything, emphasising with each phrase the total isolation that Munro feels and the struggle he has making sense of his new life, drawing you in while he slowly starts to think for himself, trust his own judgement, make decisions on his own for the first time and get to grips with the mysteries that surround him.

This is classic science fiction. On the surface a kind of psychological thriller with themes of alienation and isolation – the needs of the many against the needs of the few – but it has a depth and complexity usually lacking in YA science fiction and demands thoughtful reading time that will leave you pondering the questions it poses long after you finally put it down. The near-future setting even makes the very possible science a talking point.

Thought-provoking, stylish and immensely enjoyable W.E. would make a fine addition to anyone’s library but for a science fiction fan it is a must buy.

W.E. is published by David Fickling Books and is available fromPlay.com, Blackwell, and all good book stores.