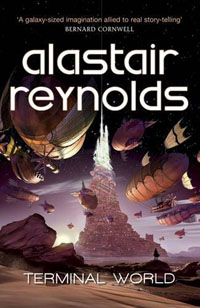 When the body of an angel is found on a building ledge it is taken to Dr. Quillon. It’s a rare occurrence but he’s seen a few and has a particular interest in them so it makes sense to take the body to him. This time, however, is different. The creature on his slab is alive and what he tells the doctor changes everything. You see Quillon is himself an angel. Adapted to live among the humans in Spearpoint – almost the last human city – as part of an advance scouting force for an invasion that never happened, he ends up staying there, an anomaly, hiding in plain site. With the help of his only friend and ally, an ex-cop called Fray, he keeps his wing-growth in check and goes about his work in quiet solitude. But he has been discovered. The angels want him dead and this would-be corpse is an envoy sent to warn him to skip town before his pursuers hunt him down.

Quillon goes straight to Fray who puts him together with tough-talking Meroka. She will be his guide and protector as they escape from the city but she doesn’t know he is an angel, which is just as well given her disposition towards them, in fact it’s something fact Quillon goes out of his way to keep hidden as his ‘kind’ are not exactly popular amongst the humans. Together they start to make their way across the ‘zones’ with Quillon administering anti-zonals to cope with the energy changes until a series of violent encounters see them eventually taken prisoner by the Swarm, a permanently airborne people that live in dirigibles of varying size and military strength. The Swarm have no love of Spearpointers and police the world outside of the great city according to their own doctrines. The luckless pair eventually find something of a home with their captors But when a catastrophic zone shift causes the entire world to change shape, and when Spearpoint begins to die Quillon and Meroka must enlist the help of the Swarm to deliver anti-zonals to it’s people before humanity is gone for good.

Alastair Reynolds is best known for the hard SF of his Revelation Space series of novels so Terminal World is something of a departure for him being almost a fantasy/SF hybrid with a distinct steampunk edge and tinged with a noir detective feel. By all accounts Gollancz handed him a cheque for a million quid and a 10 book-10 year deal on receiving it and I can see why, every inch fair drips with imagination and excitement and when I finally put it down I couldn’t help thinking they got a good deal.

Despite his general passivity, at the heart of everything and driving the story forward is Quillon, but it’s not so much what he does or says, he is often just the catalyst, it’s what he inspires the other characters he encounters to do or say that makes him interesting. This is particularly true of Meroka who hates angels and would as soon kill him as help him, but by the time she realises his origins he has already demonstrated through quiet deeds and thoughts that he is different and soon she is questioning her own beliefs and developing a trust that informs her story as much as his. This is true for most of the other characters we meet during the course of the book, where they immediately mistrust him because of his background, his steadfast and trustworthy nature (almost) always brings them around in the end. It’s an easy way to bring instant conflict and tension to a story but it works remarkably well and the different ways they deal with it and the individual behaviours they exhibit as they come to terms with him help to fully round-out each character, binding them closer to each other as we reach the climax but always with a slightly edgy undercurrent.

Likewise the world itself is a fascinating creation with enormous scope and scale. The ‘zones’ that divide it are a series of semi-autonomous city-states, each of which enjoys a different – and rigidly enforced – level of technology; Horsetown is pre-industrial; in Neon Heights they have television and electric trains; the Bane is a dead zone, nothing lives, not even bacteria. Energy changes when crossing between zones effect the mental health of everyone so ‘anti-zonals’ are necessary to keep the effects at bay. Into this world reynolds has dropped Angels, Humans, Skullboys, Swarm and Vorgs, each with their part to play in this epic tale.

Underpinning all of this is the mystery of Spearpoint itself and of how the zones came to be. We never really get to find out despite these questions playing a part in the make up of the story and while the origins are investigated in some small way towards the end of the book, nothing comes of it which is kind of irritating but also leaves things open for more books in this setting.

I liked Terminal World a lot, it is an epic tale, brilliantly well written and brimming with imagination and adventure while at the same time managing to quietly mix things up genre-wise. It is both thrilling and cerebral in equal measure asking questions that require thought one minute and switching to fast and furious battle scenes the next. If I have one gripe – and it’s a strange one I’ll grant you – it’s that Terminal World has maybe a little too much story going on and some simplification might have made it a more pacey read, but I’m nit-picking, it’s a smashing book and deserves a place in anyones SF library.

Terminal World is published by Gollancz and is available from Play.com, Blackwell, and all good book stores.