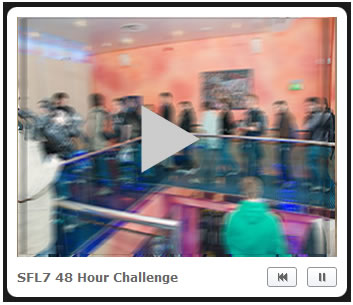 The Challenge, is part of the festival and takes place on the weekend of 10th – 12th April. Participating teams register online at SCI-FI-LONDON.COM and then attend a briefing at one of 4 cinemas in the UK or receive information by text message.

The rules are very simple:
We give you the TITLE, some DIALOGUE and a PROP list on the morning of Saturday 10th April and you have 2 days to make a complete 5-minute science fiction film.

Prizes:
The top 3 films picked by the jury will receive some great prizes including camera kit, software and memberships to groups like Shootingpeople.org. The overall winning film will also be presented at the festival’s opening night gala screening of Natali’s SPLICE.

Previous winner success:
Taking part and completing a film does not guarantee a career in the movies, but the 2008 winner, Gareth Edwards, had his first feature film green-lit immediately after Vertigo pictures saw what he could do in one weekend with no budget! His feature MONSTERS had its world premiere at SXSW in March and will be opening in the UK in 2010.

Taking part:
It is easy to take part and importantly it is free. Simple register at www.sci-fi-london.com and either get ready for your SMS title to arrive or visit one of the four sites:
* Apollo Piccadilly Circus, London
* Apollo Fareham
* Apollo Altrincham
* Filmhouse Edinburgh

For more details and to see the previous films go here