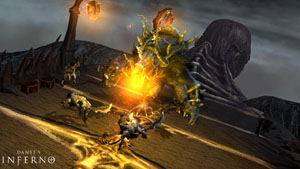 The XY Review by Ian Abbott

A flimsy interpretation of a classic literary masterpiece? Check.

Mr Dante has a slight disagreement with Death and decides to steal his almighty scythe. Now Mr Dante (let’s call him Big D from now on) has a good-looking lady, Beatrice, back at home and lo and behold – she gets caught up in a Lucifer love triangle who steals her away into the nine circles of hell and guess where Big D has to go to get her back? Big D has a lot of choices to make on his quest to save his lady. Should he a) punish the damned souls who get in his way and pump up his unholy-ometer? Or b) absolve the poor wretches of their sins and get on the good side of the man upstairs? I’m not one for historical accuracy, but you’d fail your GCSE History of Literature if EA were providing the revision guides. 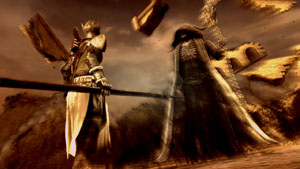 It’s not going to win any awards from the originality department either (God of War anyone?), but it looks good and just about keeps you immersed in the overall game play. Rampaging through level after level of richly detailed sets and worlds is fun and the beasts get bigger, tougher and more graphic – but when you take them down, oh it’s satisfying! You will die (or whatever it is you do when you’re already dead) many, many times throughout this game, as it’s not always clear how to kill your enemies, but this is hell right?

You’ve got the odd tricky logic puzzle dropped in for good measure too, which gives the button mashing a break, and allows the game some breathing space. It gives you a time out from those relentless minions who keep giving you beef until you put them out of their misery. Now Tracey mentioned the “beautiful” animated cut scenes, for me they are damn irritating – they completely rip off Jamie Hewlett – and completely jar with the overall aesthetic of the rest of the game. They did nothing but distract me and had no visual relevance to the rest of the game and were just there to boost the nipple count. On reflection, she might have had a point.

Finally as we are dealing with a piece of the finest literature, here’s my closing literary offering which will no doubt rile Tracey as it bastardises Big D’s literary classic one more time.

There was a young man who went to hell
He killed lots of beasts to get back his belle
A fictional story, which gets really gory
It rips God of War and there are no major flaws
Dante, my soul, it’s yours to sell 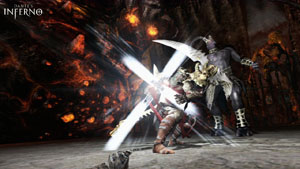 The XX Review by Tracey McGarrigan

Pay attention at the back. Now as I’m sure you all know, Dante’s Divine Comedy (written between 1308 and 1321) is an epic poem split into 3 parts; Inferno (hell), Purgatorio (purgatory) and Paradiso (paradise) and it’s the best bit – hell – which EA have concentrated their efforts. You play Dante, a templar, neither heartswooningly handsome nor a total pug, during the crusade that journeys through hell in order to rescue his beloved Beatrice. Woah!? That’s a big reworking of one of Italy’s literary masterpieces isn’t it? You guessed it! EA plumped for the clichéd boy rescues girl after she is condemned because he shagged someone else story. Instead of Beatrice guiding Dante through Heaven, here she’s in Hell because Dante, despite promising to be faithful, found he couldn’t keep his chain mail underpants on. “I have no choice,” she whimpers to him as Lucifer whisks her away. “She doesn’t deserve this!” cries our *ahem* hero and so it is redemption searching Dante to the rescue. I guess the ‘Beatrice’s Inferno’ pitch went badly wrong.

To start, there’s a brief yet beautiful animation sequence accompanied by some even briefer narrative before bam! You’re in the heart of a full on riot! Instinctively, you’ll start wildly jabbing at your X-button hoping for the best and wondering what on earth to do whilst your life is brutally hacked away then finally, the onscreen commands kick in. In fact, throughout the game, whenever you need to press the right button to make the right jump or more importantly, correctly chop something’s head off, you can pretty much guarantee that it will let you know far too late what you needed to do. Get used to this now as it will become a constant annoyance – seems Dante shouldn’t be the only one to experience gaming hell. However, there is plenty of pleasure to be had! The hellish minions and beasts are varied and tough little blighters, there are some inventive and impressive moves, dozens of different button combinations for fighting and the game play is fast paced yet balanced (there are puzzles and climbing obstacles to give your thumbs a rest whilst the animated cut scenes are short enough to reveal the story and provide some context without being dull or breaking the momentum). The camera keeps up and isn’t distracting or annoying whilst the attention to detail in both the game play and animation is stunning and creative with my particular favourite being the intestines with stumpy, minging teeth in the realm of gluttony.

Answers on a postcard as to how many unnecessary boobs (both the bobbing, fleshy, kind and the lusty, tongues-for-nipples-that-spew-out-unbabtised-babies-with-steel-blades-for-arms kind) you can spot. Talking to Ian about the game, he commented that he thought the onscreen boobage was realistic. A welcome relief I suppose from the countless other anatomically incorrect females we’ve seen in games over the ages and the fact remains, this game is addictive, there are plenty of gruesome surprises and it’s devilishly good fun!

DANTE’S INFERNO is out now on PS3, Xbox 360 and PSP from EA Games and available from Play and all good retailers.

We have two copies of the game on PS3 to give away, courtesy of EA Games. Click on the link below to enter the competition, which closes on March 28, 2010.