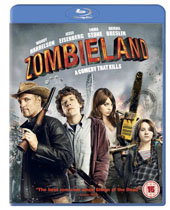 Apart from THE WOLFMAN’s recent, ill-advised outing, it is zombies and vampires that make up the bulk of the classic monster movies, although, relatively speaking, zombies are the new kids in town. Vampires are all cultured and literate, the new romantics if you like, and could possibly explain why so many recent outings have been taking place in schools and other cultural establishments. Zombies, on the other hand, are the punks of horror, angry and dirty. Just as the vampires of old used to be suave but ruthless predators, the current batch all seem to become all PC and touchy-feely, not to mention sparkly and impervious to their mythological weaknesses, the zombies have stopped being braindead shufflers that could be stopped by a single bullet to the head, and now run. However, the zombies seem to do a much better job of shuffling over into other genres, especially comedy, whereas modern teen vampires are a bit of a joke. The daddy of all zom-coms is still SHAUN OF THE DEAD, and there have been some entertaining efforts to expand the canon, such as low-budget WASTING AWAY, which shows life from the zombies perspective. Now there’s a new zom-com in town that is the US answer to SHAUN. It’s set in wide-open spaces of North America, not a corner of North London, and has big cars, big guns, big movie stars and, thankfully, big laughs. 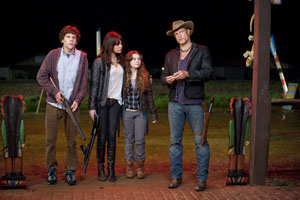 Jesse Eissenberg is reprising his recent ADVENTURELAND role as the nice-but-nerdy guy who doesn’t have a lot of life experience, mainly because he spends most of it alone in his apartment, which saves him when the zombie plague hits. Left to his own devices, and some self-imposed rules that are cleverly demonstrated at the beginning of the film and punctuate it throughout for comedic effect, he sets off to find his parents and a zombie-free zone. On the way he meets and joins up with Tallahassee (Woody Harrelson), a gun-toting, Twinkie-craving bad-ass, who is definitely channelling Harrelson’s Mickey Knox character. This unlikely pair set off across the US dispensing of the undead in imaginative ways, until they meet up with two wily sisters (Emma Stone and Abigail Breslin) and trouble ensues as they head off to a Californian amusement park. 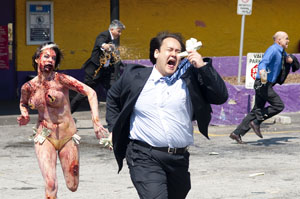 The humour is a mixture of splatstick and pop culture references (America’s only culture it seems), with a fantastic cameo from a Hollywood legend (although, like the twist in SIXTH SENSE, this is now fairly common knowledge, which does dilute the impact a little). There is even a little rom added to the zom and com as Columbus falls for Emma Stone’s character, which sets up the motivation for the movie’s big finale; and shows that maybe the sisters weren’t as smart as they thought they were. This may be all a bit vague and cryptic, but I don’t want to give away too many spoilers that will detract from the laughs and gory surprises, of which there are plenty.

SHAUN OF THE DEAD may have set the benchmark for zom-rom-coms, but ZOMBIELAND certainly rises to the challenge.

Nothing outstanding in the way of special features, just some bog standard behind the scenes and making-of docs, along with deleted scenes and commentaries.

ZOMBIELAND is released on DVD and Blu-ray on March 15 through Sony Pictures Home Entertainment and is available from Play and all good retailers.