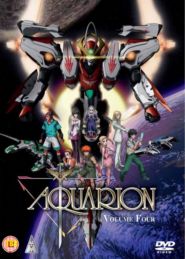 Brief synopsis:
After more than twelve thousand years, the battle between humanity and the Shadow Angels finally reaches a head. Death and betrayal becomes the norm as both sides continue to battle on in a war, both believing their side to have the moral high ground but with neither’s actions demonstrating as such. As the final battle draws near it would seem that the outcome has already been written in the stars and it’s up to Aquarion’s pilots to grasp their fate with their own two hands or die trying.

Comments:
Even though this show didn’t exactly break new ground or set the world on fire and none of it’s big shocks and surprises were particularly shocking nor surprising – seriously if you don’t figure out who was going to fall for who / betray who / have a mental breakdown within the first six episodes then you’re probably not watching the same show – I couldn’t help but enjoy it. The scriptwriters barrelled their way through these twenty-six episodes with the kind of subtly that makes you think they were probably writing in crayon and a steadfast earnestness that left the show not just proudly wearing it’s heart on it’s sleeve but also it’s kidneys and part of it’s spleen was on there as well. It’s a show that could easily have gone badly wrong but in the end it’s kinda hard not to like it. The animation quality was – except for the occasional wobbly bit – of decent quality all the way through, the CGI ended up not going too far over the top, the dub cast for once could let rip with the “guts and glory” without fear of stuffing it all up and the music wasn’t just good; no, it was damn good. All told it’s a big ol’ pile of brain-in-neutral, grin-on-face, hi-octane fun. 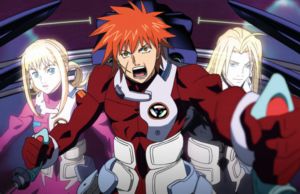 Extras:
Several AMVs (anime music videos) made up of clips from the show put to a number of the best pieces of incidental music from the series plus a pair of trailers and a short featurette about the creation of the 3D CGI used during the show’s creation.

Aquarion – Volume 4 will be available from most high street and online retailers from 15th March 2010. Previous SFL reviews of this series can be found here and here. 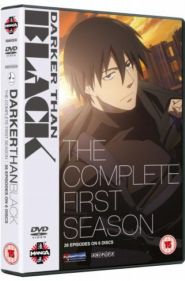 Brief synopsis:
It’s been a decade since the physical phenomena known as “Hell’s Gate” appeared in central Tokyo. Apart from bringing catastrophe upon the city itself, it’s appearance was also marked by the disappearance from view of every single celestial body. The stars are replaced in the night sky by false stars, each one representing what’s secretly know as “contractors”, a small number of humans who’ve been gifted by Hell’s Gate with super human powers such a levitation, telepathy or control of electricity. But these powers are as much a curse as they are a gift as not only does each contractor lose their ability to feel emotion, but they also have to literally pay the price every time they use their powers. Each contractor’s price, or remuneration is different, some as harmlessly benign as singing a melody or folding over a page of a book to others as gruesome as breaking one’s own bones or drinking the blood of a child.

The existence of Contractors is kept hidden from the public at large and they find themselves being employed by various agencies and syndicates – some legal, some illicit, but all with agendas unknown – as agents, spies and assassins. One such contractor, known as the “Black Reaper” to the independent syndicate that employs him and “BK201” to the law enforcement agents that hunt him, is tasked with taking down other contractors whilst playing a cat and mouse game against government agencies that would use contractors for their own gains. But the Black Reaper doesn’t work alone; the syndicate has given him a false identity and placed him with a team comprised of a blind psychic, a former police detective and an agent able to hijack the bodies of other living things. When Black Reaper’s various identities start to come into conflict and elements of not just his own past, but those of his team members as well, start to catch up with him then he’ll need all his skills, all his wits and all his powers just to stay alive. 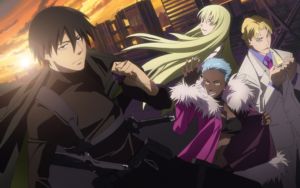 Comments:
In creating this series, Production company Bones has managed something that the likes of GONZO have been trying to do for years; namely present a good plot with well written story lines and interesting characters whilst at the same time maintaining the high quality animation all the way through. Mind you, much like stable-mate Code Geass before it, during it’s original transmission on Japanese TV Darker than Black had a helping hand with it’s production budget due to several sponsorship deals which lead to some quite heavy product placement – often to the point of distraction – with billboards and products from the likes of Pizza Hut and Coca-Cola though thankfully it’s been mostly replaced in the DVD release with less obtrusive generic logos

Plot wise, think X-Men meets Heroes and then turn it into a suspense-thriller anime and you’re part way to Darker than Black. Written and created by Tensai Okamura (Neon Genesis Evangelion, Soul Eater, Wolf’s Rain) with more political machinations, uncertain loyalties, grand power plays and double-crossing back-stabbers than a top class spy novel. The mysterious powers-that-be behind the various governments and their law enforcements agencies are as shady and suspect as the criminal syndicates and so called terrorist organisations. There’s as much misdirection and sleight of hand going on for the audience as there is for the characters and our “good guys” may not be as altruistic as they like to make out meaning the “bad guys” may ultimately be the lesser of two evils.

Often a great series like this can be let down by a lacklustre English language dub but in this case US distributor FUNimation have really pulled it out of the bag with one of their best dubs to date, especially where the more established and explored characters are concerned. There’s still the occasional mispronunciation of Japanese names and terms but not enough to put a dampener on proceedings. A special mention has to be made of November 11’s voice actor, Troy Baker, who manages to pull off a British accent that, while not 100% convincing, at least doesn’t sound like Dick van Dyke in Mary Poppins. 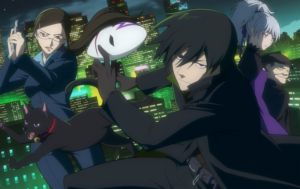 Also, the English language version is at times a whole lot easier to follow especially during the last two or three episodes where it becomes vitally important to get your head around who’s been doing what and why. The plot can stray into Evangelion or Ghost in the Shell: Stand Alone Complex head twister territory at times so in this instance I’d actually go so far as to suggest that those of you who generally prefer to steer away from the dub give it go this time, if only for the final disc.

Extras:
Each of the six discs includes an Audio Commentary for one episode, Character Bios, Production Art Gallery and Textless Opening & Closing Songs while disc one also includes the Cast Auditions for the English language version and disc six includes a bonus DVD exclusive 26th episode that was never transmitted on Japan TV.

Darker Than Black: Complete Series Box Set will be available from most high streets and online retailers from 22nd March 2010. Previous SFL reviews for this series can be found here and here.