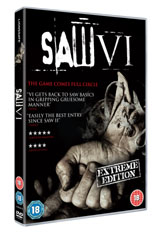 Last week I was delighted to be invited to the launch of a new ride at Thorpe Park. A free bar, some celebrities (got my photo taken with Bill Bailey!), a coach trip, zero minutes waiting time, canapés, and all the re-rides you could possibly want; it really was the best possible thing that could ever happen to me. It prompted me to write to my high school careers guidance counselor and tell her she got it all wrong – you can get jobs where you review theme park rides. Happy days indeed!

The new attraction we were celebrating the launch of is the SAW ALIVE horror maze – a live-action house of horrors based on the SAW franchise of films. I don’t know about you, but when I think about the SAW films I really don’t think ”live”-action, but so it goes. On the coach on the way out to the theme park all I could think is how inappropriate it would be to see a warning of keeping all limbs inside the vehicle – this is one attraction where limbs should be lost.

For those of you familiar with the SAW franchise, it certainly seems like it is around to stay. People in my generation who love the fact taht they made a million Nightmare on Elm Streets and Friday the 13ths, there is a certain satisfaction when horror filmmakers keep producing sequels. They might not all be as good as the first film, in fact, very few are, but sometimes it is nice to celebrate attributes like sheer perseverance. 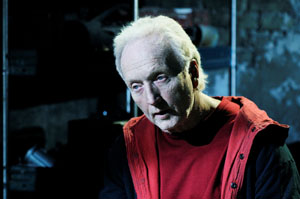 I recently watched SAW VI (which is now available in shops on Blu Ray and DVD) and have to say that for a horror film it sure did have a lot to say about topical political issues. In the latest film the victims of Jigsaw are representatives from a private health insurance company – a company that takes customer’s money and then lets them die. With Obama and his campaign for healthcare reform being in the press so much recently it is a nice to see that horror can have a political platform. Really, I don’t think I am reading too much into this.

As well as this, the whole catalogue of SAW films is full of unlikable people and I am never really entirely sure who it is I want to die and who is evil. The morals of SAW VI are complex, and if I were a thinking person I would say that it blurs the lines between good and evil. There were few characters in the film that are wholly innocent – they can only be measured in levels of evil.

The SAW ALIVE attraction at Thorpe Park has none of the complexities of the film. It is basically a series of poorly lit rooms where actors terrify you to the soundtrack of clanging chains, and screaming. The fake blood, smell of urine, electric shocks and people with pig faces made me fairly desperate to find an exit. There are some surprisingly sickening moments and though I have always hated the house of horror attractions at theme parks, I can see how this is going to attract a younger audience, not a battle-hardened one like me, who will probably not be able to sleep for a long time afterwards.

Alongside this attraction is the awesome SAW Rollercoaster, which is possibly one of the best vertical plunges I have ever taken while strapped into a lump of metal.

If anyone is wanting to feel slightly ill for a whole day, I recommend starting with a trip to Thorpe Park. Tell them you want to play a game.