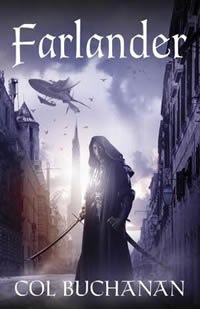 For fifty years The Heart Of The World has been at war. The Holy Empire of Mann has swept across the world conquering nation after nation with their leader, Holy Matriarch Sasheen, maintaining power and control through priestly ‘Diplomats’ who bend the conquered peoples to the will of Mann with ruthless efficiency. The only confederacy yet to fall are the Mercian Free Ports, protected by the city of Bar-Khos and the ninety foot high walls that have kept a 10 year siege by the Imperial Fourth Army at bay. But they cannot hold out for much longer. Food and weapons are scarce, supply routes choked and the will of the people to continue fighting in cramped tunnels under the walls is lessening every day.

Against this backdrop a young man called Nico, starving and desperate, breaks the law for the first time and the mistake looks set to cost him his life until his victim offers Nico a way out, a second chance at life, if he will become his apprentice. But this is no ordinary apprenticeship for Nico’s saviour, Ash, is a Rōshun, secretive assassins that offer protection through the threat of vendetta and Nico must turn his back on everything he knows and holds dear forever. For his part, Ash is old and in ill health and must take on the apprentice to fulfil an old promise. They form an uneasy alliance until the son of The Holy Matriarch deliberately murders a woman under the protection of Rōshun vendetta and sets them on a course that takes them into the heart of the conflict between the Empire and the Free Ports.

I’d heard some mutterings about Farlander before getting a copy so I was definitely looking forward to it and I have to say that the cover by Steve Stone is a stand-out and would have had me grabbing it off the shelves straightaway even before reading the blurb. The book though, while an excellent read and a terrific debut, is spotty in the telling and suffers a little from ‘first of a series’ syndrome.

It takes off at pace, there’s an exciting prologue that introduces us to the assassin, Ash, but then through the next several chapters there’s alternately a bit of world-building a bit of character-building a new character here, another there – most notably Nico the other central character – and while the prose is first class and the tale compelling enough to draw you in, it feels episodic at times, like story-telling by numbers. This isn’t necessarily a bad thing, good structure is fundamental to good story-telling, but it does mean that despite the quality of the writing you get the feeling throughout the first half that you’ve read it all before with baddies that are over-the-top, debauched, corrupt, orgy-loving, pseudo-religious, human-sacrificing psychopaths and the good guys are a poor, naive, starving, beggar-thief apprentice and his assassin master.

However, despite the shortcomings of the first half the second half picks up quickly, as though once Buchanan felt he’d done with the setup he got stuck into the story and it’s here that he simply blossoms. Nico’s apprenticeship serves as a nice hook to hang the Rōshun history and teachings on and each lesson also shows us something of Ash and his nature without him having to be there. The previously cartoon villains become subtler and more believable and as the story takes off the action flows thick and fast, ratcheting up the tension at every turn and, without giving anything away, the dénouement was as gripping as any that I’ve read in the last few years with an ending that was so completely unexpected I had to read it twice to make sure I’d got it right, kudos to Mr. Buchanan because that doesn’t happen very often.

There are lovely touches of detail throughout, The Rōshun and their code of ‘vendetta’ is beautifully thought through, the magic is simple with a very light touch and the world itself is undergoing a significant technical change with the war-effort yielding gunpowder, airships and even a pistol of sorts which means that nothing is entirely straightforward or as expected. One particularly gratifying element is how the city of Q’os has taken to coin-operated machinery. Book into a hotel but when you get to your room you need coins to open the door, or open the window, or work the taps at the sink – even in the midst of war and religious persecution commerce will always thrive.

So all-in-all, despite a patchy start, Farlander is a solid and entertaining debut. Similarities could easily be drawn to Steven Erikson but Col Buchanan is his own writer with a great deal of talent at his fingertips and he will only get better and better, making this series a definite one to watch.

Farlander is published by Tor through Pan Macmillan and is available from Play.com, Blackwell, and all good book stores.