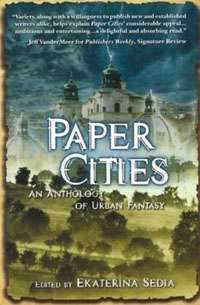 Cities have always enthralled me in a way that the countryside cannot. They move fast and they don’t stop moving, filled with the sights and sounds of commerce and industry, secretaries and shopkeepers, suits and overalls. But while the surface is all gloss and polish, there’s always the other side, that seedy underbelly where things are at once scary and dangerous, thrilling and exhilarating, where the young and invincible go for good times never expecting to be stuck there desperate for a way out. For all of these reasons I’ve always enjoyed stories set in cities and so Paper Cities, Winner of the 2009 World Fantasy Award for Best Anthology, was always going to be an attractive proposition, shame then that it’s a hit and miss affair.

It’s not that any of the stories are bad, they’re not, and on the whole the writing is of a decent standard, but in the reading I wanted to feel some of the thrill and exhilaration, the horror and the heartache of living in a city but all too often, despite a good beginning or an interesting premise the end result was, if not entirely lacklustre, entirely predictable. I’ve always felt, too, that in any great city story, the city should be as much a character as any other, with the ability to affect behaviours and change moods, provide light and warmth and protection or cause darkness and danger. None of the stories in Paper Cities really manages this and while it may be down to the limitations of the short story form, it’s a poor excuse not to at least give a decent flavour.

There are high points, I particularly enjoyed Forrest Aguirre’s ‘Andretto Walks The King’s Way’, Greg van Eekhout’s ‘Ghost Market’, Cat Rambo’s ‘The Bumblety’s Marble’, Ben Peek’s ‘The Funeral, Ruined’ and Catherynne M. Valente’s ‘Palimpsest’; while none of them are particularly in need of a city to tell their tale, the make good use of it as backdrop. On the downside however, despite some good stories and entertaining writing there is no cohesive ‘theme’ linking these tales, no effort to explore the city and what it means to its inhabitants and no better understanding of the term ‘Urban Fantasy’ – and no, I don’t mean books about chicks who dig vampires.

In the end Paper Cities is a decent stab at stringing together a bunch of stories all set in a city. There are some nice little tales and the quality is high, as an occasional tale before bed or a ‘bathroom book’ it makes good sense but if you’re after any deeper introspection or higher meaning then this is not the collection for you.

Paper Cities: An Anthology Of Urban Fantasy is published by Senses Five and is available from Play.com, Blackwell, and all good book stores.