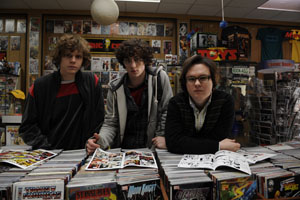 Over the last few years we have been inundated with comic-book movies, most of them of the superhero variety done with varying degrees of success. Although the books are mostly an American cultural phenomenon, the most intriguing stories and movies in recent times have come out of Britain, from Alan Moore’s Watchmen and V for Vendetta, to Chris Nolan’s disturbing The Dark Knight. Now Matthew Vaughn (Stardust, Layer Cake) has made one of the most exciting comic-book movies in years. Adapted by Jane Goldman (Mrs Jonathan Ross) from a story by Scottish writer Mark Millar, this owes more to comic-book culture than the traditional superhero comic. 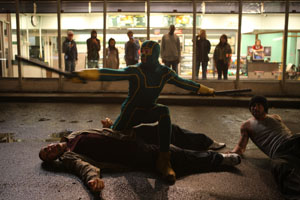 Dave Lizewski (Aaron Johnson) is your average teenage comic-book geek who decides that the city needs a crime-fighting hero. He makes himself a costume from a wetsuit and mask, gives himself the name Kick-Ass and sets about combating muggers, except not only does he not have any superpowers but also no fighting skills either. When he becomes an internet sensation after being filmed in a fight with some thugs, he also becomes the target of mob boss Frank D’Amico (Mark Strong), who thinks it is Kick-Ass that is destroying his drug-running business. Kick-Ass’s new-found fame also attracts some new wannabe heroes in the form of Red Mist (Christopher Mintz-Plasse). However, the real heroes are Big Daddy (Nicolas Cage) and his 11-year-old daughter and sidekick Hit Girl (Chloë Moretz).

Although it is supposed to be Johnson’s film it is Moretz who steals every scene she is in. She gets the best lines with the most swearing and also the best action scenes. There’s not really a lot more to say about this movie. It is simply one of the best, funny, action-packed comic movies you could hope to see. It is a bit brutal at times, but it is cartoon action (and toned down from the comic-book version), and although the trailer with Moretz effing and blinding has got some people angry with righteous indignation, it is done for brilliant comic effect.

This is as close as you can get to the perfect comic-book movie. Just go see it, it will have you laughing and hooting the whole way through.

KICK-ASS is out in the UK on March 26, internationally in April. 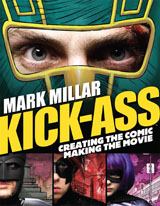 To celebrate the release of this awesome film we have five copies of Titan Books Kick-Ass: Creating The Comic, Making The Movie to give away, courtesy of Universal and Titan Books www.titanbooks.com. Click on the link below to enter the competition, which closes on 10 April 2010