Jean-Pierre Jeunet has to be one of the most inventive filmmakers in France today. From partnership with Marc Caro, through ALIEN: RESURRECTION to his introduction of Audrey Tatou to the world with AMELIE, he has created cinematic worlds of both darkness and wonder, as well as what must be a true anomaly, French feelgood movies. His latest movie, MICMACS (MICMACS À TIRE-LARIGOT), is an amalgam of his works to date (not counting ALIEN 4), capturing the sunny Parisian innocence of AMELIE, with the dark surreal worlds of DELICATESSEN and THE CITY OF LOST CHILDREN.

We are introduced to the hero of the film, Bazil (Dany Boon) through a series of short vignettes, as his father is blown up by a mine in the Moroccan desert, his mother is taken away by some men in white coats, he survives an orphanage only to be accidentally shot in the head. Surviving the wound, but with the bullet still in his brain he lives on the streets of Paris determined to get revenge on the weapons manufacturers who have destroyed his life. He meets up with a group of urban recyclers (similar to the old rag ‘n’ bone men who used to wander the streets of London). They welcome him into their home, a veritable Aladdin’s cave of junk, as part of their extended adopted family and together, using their unique skills to try bring down the two competing arms dealers. 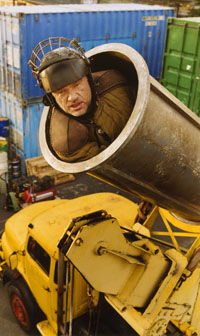 This is a truly magical film full of weird and wonderful characters, wicked villains, brilliant sight gags and clever wordplay, many of which even translate into English. Like with AMELIE, Jeunet creates a Paris that is real, fantastical and romantic for this band of misfit heroes to live in. He manages to even add a strong anti-war message, which feels a little bit forced at first but is so brilliantly executed in the end it is easily excused.

Forget all the hype of the award-nominated films, this is by far the best movie of the year so far. Hunt it down and be amazed, and leave the cinema feeling good, without having to suffer from the saccharine sentimentality of a Hollywood movie.

MICMACS is in cinemas from February 26.