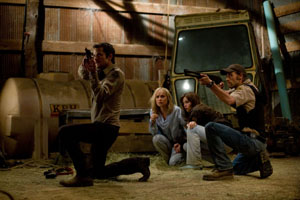 There are few things I like more than when small town American gets screwed over by their government and locals have to save themselves or die trying. I mean, really, I do like some things more than that, but in films that pretty much does it for me. When I heard they were remaking George A. Romero’s 1973 low-budget cult classic THE CRAZIES I was pretty excited. This is a great not-a-zombie film where everyone will have to battle to save themselves or be destined to kill each other. 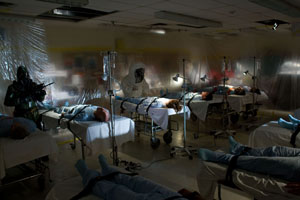 THE CRAZIES tells the story of a sheriff of a cow-poke town, Ogden Marsh, where you either leave as soon as possible or knock up your high school sweetheart and turn into your parents. When a baseball game gets interrupted by the town drunk with a gun you get the feeling that nothing in the town will ever be quite ordinary again. Sheriff David Dutton, played by the very handsome Timothy Olyphant (Seth Bullock from TV’s DEADWOOD), finds himself in the middle of a large-scale government cover-up. Separated from his pregnant wife who is misdiagnosed with the infection that is turning the whole town in to violent psychopaths, he teams up with his Deputy Russell (UK actor Joe Anderson) for a rescue mission – having to avoid the violent infected townspeople and the military trying to contain the outbreak.

While the original film is a classic, the remake doesn’t quite do it justice. I generally think remaking films is OK. Sometimes the stories are so good they deserve a bit of a bigger budget and better technology to bring them up to date. But sometimes, it just doesn’t quite work. While watching this film I felt a little like a passenger. And though I did cringe in parts (who wouldn’t when someone is pinned to the ground with a hunting knife stabbed through the hand?), I couldn’t quite feel part of the action or the suspense.

But regardless, it is great to see Olyphant’s lovely face all over the big screen. If it wasn’t for the obvious danger that seems to be inherent in living in a small town in America, I would move there in an instant and marry a sheriff. I am tempted to do it anyway, but based on my frequency of catching colds I don’t think I could survive an outbreak.

THE CRAZIES is in cinemas now from Momentum.