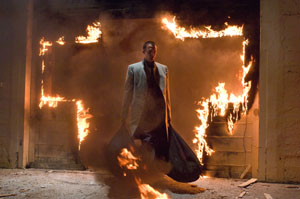 Earthquakes, tidal waves, floods, disease; the list goes on. It’s enough to make you wonder if maybe the end is nigh after all. Roland Emmerich has already given us two bleak possibilities with THE DAY AFTER TOMORROW and 2012, but it’s the church that seems to hold the monopoly, not to mention a vested interest, in the arrival of the apocalypse, even if it is to have their last words as “Told you so”. Of course, Hollywood wants a slice of that action with something to appeal to the religious right(eous) who won’t buy into the scientific, climate change option. There have been plenty of post-apocalyptic movies, which are a staple sub-genre of sci-fi, but there haven’t been too many apocalyptic movies, and LEGION definitely wants to leave its mark in this sparse sub-genre. 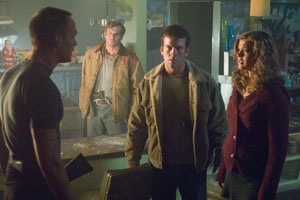 The film starts, after a slow pseudo-poetic voiceover, with Michael (as in the Archangel) dropping from the heavens into modern day Los Angeles (the city of angels – obvious, but hey, it’s Hollywood, what do you expect?). Forsaking his wings he tools up Neo style with “guns, lots of guns”, having somehow forsaken his cosmic powers for kung fu and bullets. Meanwhile, at a remote dustbowl diner called Paradise Falls (see parenthetical above re:LA) we meet the rest of the protagonists: Charlie, the heavily pregnant waitress; Jeep, who is in love with Charlie, but not the father of the child; Bob, Jeep’s dad and the diner owner; Percy, the one-armed cook; and their customers, a well-to-do couple and their teenage daughter, and a bad-ass black dude, all of whom are lost on their journeys. Then it all starts going weird as the sky goes black and supernatural creatures start to attack and lay siege to the diner, when Michael (a heavily tattooed Paul Bettany) arrives with his arsenal and they start to shoot the shit of the possessed attackers. Michael then informs them it’s the end of the world and that these creatures are coming to kill Charlie’s unborn baby, as it is humanities only hope. Need I go on? It’s all fairly predictable with some living, but most dying in the ensuing battle.

Being an American movie it is a totally Christian interpretation of fire and brimstone and the last judgement and doesn’t even suggest that there could be other end of days scenarios, although angels are common to all Middle Eastern religions, as is a Judgement Day. And of course good old-fashioned military grade ballistics are a perfectly effective solution for fighting supernatural entities. 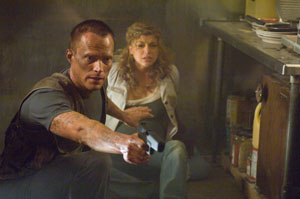 So, the story is preposterous and obvious, but the action scenes are well choreographed and realised with some great special effects and the occasional good throwaway line. Unfortunately, when the only really positive thing to say about the film is its special effects, it’s not much of a recommendation if you are looking for a film with a bit of substance. Really, it’s just a popcorn effects movie that thinks it’s deeper than it really is, and it has been done better before with films such as END OF DAYS (with Arnie) and STIGMATA. However, by far the best apocalypse aversion film, with angels, has to be Kevin Smith’s DOGMA, which amongst all the (very funny) crass humour is a surprisingly profound and insightful look at humanity and religion.

If we really are racing towards the apocalypse then there are better ways of spending your time than watching this film, which doesn’t really give any practical tips on how to avert it, except stay indoors and arm yourself with big guns.